DAMN THE DEFIANT! , a damned good nautical rouser from 1962, hoisted sails that year with Mutiny On The Bounty and Billy Budd, yet while quite popular in Britain, it only made enough in the States ($800,000) to list into berth at 122nd place, and is largely forgotten today. From the crow’s nest, we cry “foul”, as while it couldn’t match the epic romantic exoticism of Mutiny On The Bounty, or boast the literary linage of Billy Budd, it offers strong performances, a compelling story and a good measure of exciting action. *

1797. While cruising the ‘H.M.S. Defiant’ through the Mediterranean to protect a convoy against the French, ‘Captain Crawford’ (Alec Guinness) has to contend with his first officer, ‘Lieutenant Scott-Paget’ (Dirk Bogarde), a calculating sadist who thinks his political connections will protect him from his continual insubordination. His brutalizing of the crew includes tormenting Crawford’s teenage son, a fledgling midshipman. Meanwhile, the fed-up crew, led by seaman ‘Vizard’ (Anthony Quayle), plot to join a fleet-wide mutiny. Then the French show up.

Veteran director Lewis Gilbert had proven shipshape mettle with the likes of Sink The Bismarck!, and he stages both the intimate conflicts and the broadside-blasting battle scenes with skill. With a screenplay by lauded pros Nigel Kneale and Edmund H. North, the travails of the fictional H.M.S. Defiant (the movie’s title in England) were based off Frank Tilsley’s novel “Mutiny”, set during the period of the actual ‘Spitshead Mutiny’ of 1797, when British sailors on 31 ships rebelled against their awful conditions and treatment. *

Guinness and Quayle knocked this off during a break from the endless shoot of Lawrence Of Arabia.   Along with Tunes Of Glory, this gives Guinness a welcome chance to be hearty as well as cerebral. Bogarde is superb, barking orders as to the manor born. All three actors had command-duty records from WW2. The movie has a rich authentic feel to it.

* British author Frank Tilsley wrote 27 novels, often taking authoritarianism to task.  He saw the Spithead sailor’s revolt that he used in “Mutiny” as the first modern workers strike, the start of unionism.  The 53-year-old writer was still working on it the day he committed suicide in 1957.

Lewis Gilbert had a talent for battle. His action showpieces included melees in The Sea Shall Not Have Them, Carve Her Name With Pride, Sink The Bismarck!, You Only Live Twice, The Adventurers, The Spy Who Loved Me and Moonraker. The furious old-style naval combat is the best staged since 1951’s Captain Horatio Hornblower, and would not be topped until Master And Commander in 2003. Aiding in making Gilbert’s mayhem move is editor Peter Hunt, who followed up with six 007 slugfests. 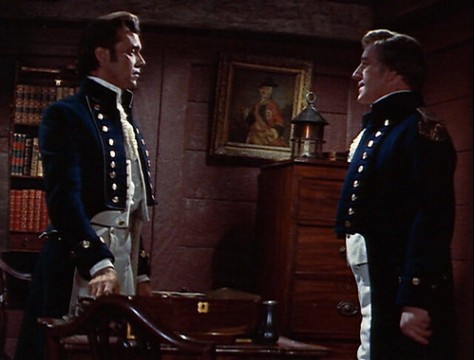 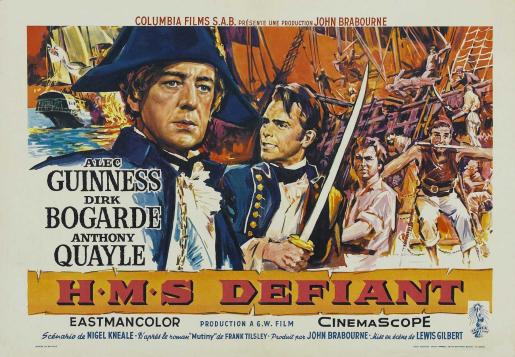