THE STAR got Bette Davis Oscar-nominated for Best Actress (her 10th of 11, with two wins) in this half considerate/half campy 1952 vehicle. The 44-year-old tackled the role of an actress her age coming to grips with the reality that she’s “past her prime” (at least in female movie star terms) and no longer bankable as a leading lady. Hollywood Giveth & Hollywood Taketh Away, in the biz-flaying mold of Sunset Boulevard and the same year’s The Bad And The Beautiful. 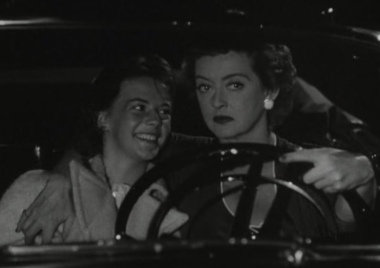 ‘Margaret Elliott’ (Davis) was a big deal, and has an Oscar to prove it, but she’s past due-date now, and all her money’s evaporated along with job offers. Self-destructive behavior doesn’t help. She gets some aid from ‘Jim Johannsen’ (Sterling Hayden), a somewhat younger former actor whose career she’d boosted. When a shot for a supporting role to a young studio-pushed beauty comes up, she seizes it, but can’t resist the egotistic urge to compete for attention.

Dale Eunson and Katherine Albert purportedly based their script on the diva Joan Crawford (once friends, this murdered that), so Davis, never concerned with vanity, no doubt relished the idea of a meaty part taking a swipe at not just the industry’s time-honored time-line dispatch of actresses past their 30s, but pointing it at a rival she didn’t much respect. Stuart Heisler directed.

Some good, incisive bits jostle with too much overheated stuff (once “real”, laugh-worthy today), and Victor Young’s wall-to-wall scoring lays on the suffering. Davis bats it as far as third base. Hayden, who was not in love with the glamour end of the movies himself, is warmer than usual (and his character works with boats, a subject the actor really cared about). Natalie Wood, 13, plays the star’s adoring daughter, but it’s not the finest hour in that early part of her career. Art vs. Life: 22-year-old model/starlet Barbara Lawrence plays herself, as the new find the studio asks Davis’ has-been to back up.

This movie must have a secret cult fan club. Camp followers will howl when Bette goes on a drunk driving ramble with her Oscar perched on the dash (one of her Davis’ own trophies, for good measure), ending up in the slammer and on the front page. However, it’s a bit unsettling to see Wood scampering around on a yacht, given her documented fear of water and her eventual tragic fate.

While audiences of ’52 lined up for the more glamorous all-star showbiz dramatics of The Bad And The Beautiful and swarmed ticket booths for the spoofing Holly Land of Singin’ In The Rain, the downer woes of The Star—despite acclaim for Davis and the tacked-on happy ending—left it a has-been on 123rd place for the year, with a gross of $2,300,000. 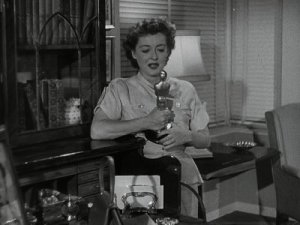 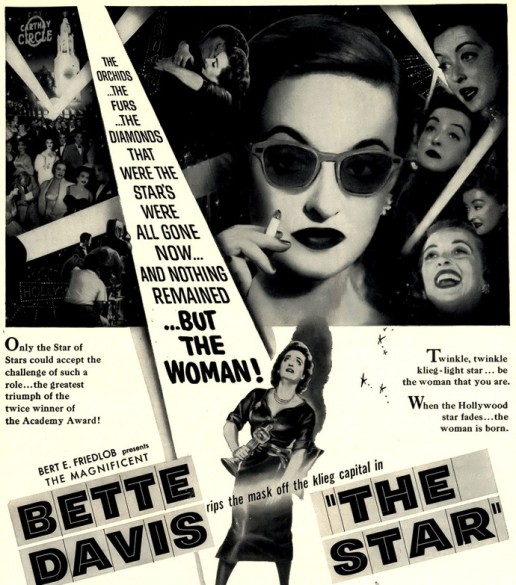