ONE HOUR WITH YOU and its saucy pre-Code sally into marital infidelity, Parisian style—as in permitted with a wink—brought smiles to audiences in 1932, who shelled out $3,300,000 to make it the 11th most popular ticket of the year. Once again teaming Maurice Chevalier and Jeanette MacDonald under the direction of Ernst Lubitsch, the cheeky musical-comedy drew an Academy Award nomination for Best Picture. *

Paris. ‘Dr. Andre Bertier’ (Chevalier) and his wife ‘Colette’ (MacDonald) adore one another, but a viper in the garden is her best friend ‘Mitzi Olivier’ (Genevieve Tobin, dripping with innuendo) who sets her cap (make that clingy gown) for Andre, who can only resist temptation so long. Andre is turned pretzel by the deception, covered by Mitzi trying to blame another woman, and divert Colette’s suspicions. This works in the favor of both Mitzi’s fed-up husband ‘Prof. Olivier’ (Roland Young) and ‘Adolph’ (Charles Ruggles), Colette’s fervent clod of an admirer.

“How does the moon affect you? It turns me inside out and upside down. I tell you, if I didn’t have such a splendid education, I’d – I’d yield to the animal in me.” 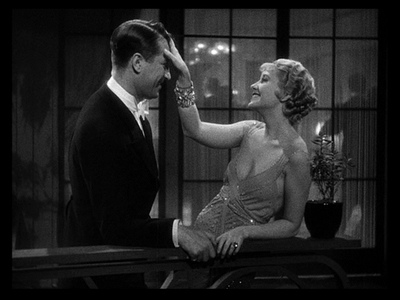 * The picture’s Oscar nomination competed for the prize with another Lubitsch-Chevalier musi-com, The Smiling Lieutenant. Yet a third Lubitsch musical-comedy—the best one—came out that year, also with Chevalier and MacDonald, the wonderful Love Me Tonight.

Lubitsch took over directing One Hour With You when both he and Chevalier were displeased by  George Cukor’s too broad handling of the material. Upset but undeterred, Cukor did manage successful credits in ’32: What Price Hollywood? (the first version of what would become A Star Is Born) and A Bill Of Divorcement, which introduced an offbeat 24-year-old named Katherine Hepburn.