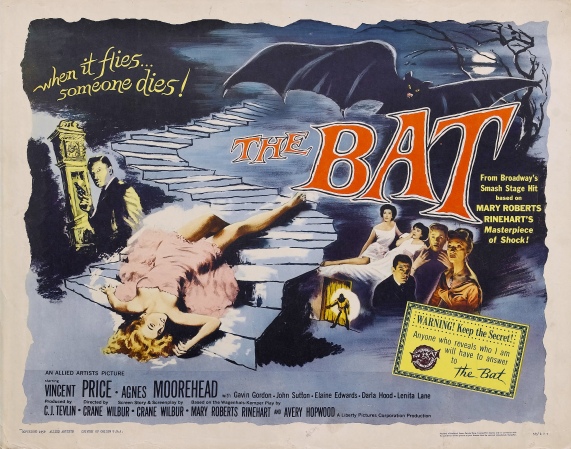 THE BAT —a campy 1959 knockoff blessed by the presence of Agnes Moorehead and Vincent Price, began its mystery-comedy flight back in 1908, as Mary Roberts Rinehart’s novel “The Circular Staircase”. Title changed to “The Bat”, it became a play in 1920, a long-running success that then spawned a silent film version in 1926, in turn a big hit, enough that it was remade four years later as The Bat Whispers, with new-fangled sound and one of the first uses of wide-screen cinematography. Crane Wilbur directed and wrote the story & screenplay adaptation for the low-budget ’59 silliness, stagy as befitting its origins, worth chuckles for the arch line readings from Moorhead and Price (Agnes with especially delicious delivery) and guffaws over some of terrible acting from supporting players, and the not exactly masterful choices in script or direction. As for scope, the opening peek at the class-project miniature model for the “estate” setting tells you 90% of the production fund must’ve gone to the two coasting, bemused stars. *

Celebrated mystery writer ‘Cornelia Van Gorder’ (Moorehead, 58) rents ‘The Oaks’, a sprawling country house, even though it’s been the site of violent murders (the throat-ripping kind) by someone dubbed ‘The Bat’. Bank embezzlement and stashed loot figure in the frightening nights that lie ahead, with several suspects to ponder, including evasive physician ‘Dr. Malcolm Wells’ (Price), who seems to know a good deal about flying rodents. 80 minutes with no real suspense (unless you were a kid when you saw this an eon ago), and some laughs over the acting, writing and staging.

Even though 92nd place for the year seems paltry, the $2,500,000 gross easily covered the cheap production outlay. In varying degrees of creaky support are Gavin Gordon (as ever, truly awful), Lenita Lane (director Wilbur’s wife, exasperating), John Sutton (as a chauffeur, a comedown for one of the better snide villains of the 40s), Elaine Edwards and John Bryant (he was ‘The Marlboro Man’).

* Holy Idea Bites! Guess where ‘Batman’ came from? According to his creator Bob Kane, inspiration for the beloved crime-basher came from the villain in The Bat Whispers.

The Bat‘s man for 1959, writer-director Crane Wilbur, had an interesting array of credits, ranging from doozies like 1938’s Girls on Probation (early paychecks for Ronald Reagan and Susan Hayward) and the 1951 agitprop I Was A Communist For The F.B.I. , to serviceable House Of Wax (a huge hit with Price), to swell: He Walked By Night and Mysterious Island.

As for Mr. Price, while he’d played plenty of sinister characters over the two previous decades, one can make the case for this picture and his three other entries that year–House On Haunted Hill, The Tingler and Return Of The Fly—marking 1959 as the year that began his full-throttle plunge into the macabre that dominated the rest of his acting career.