HELP!, The Beatles lark #2, directed by Richard Lester in 1965, was partially inspired by the Marx Brothers classic Duck Soup and the British radio & TV hit The Goon Show. Trampolined off their smash the year before with A Hard Day’s Night and the worldwide mania for all things JohnPaulGeorgeRingo, the $1,500,000 romp grossed $16,400,000, #14 for the year. Other than providing some nostalgic smiles as a time capsule peek (including numerous topical references to the Bond craze) at the boys doing their thing, it’s most notable for how Lester’s narrative technique influenced future visual presentations of pop music. * 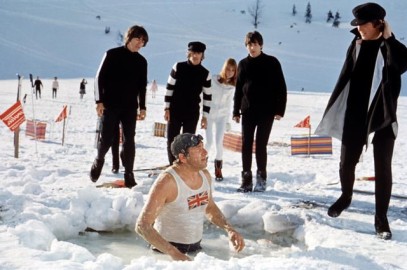 An Eastern religious cult requires a specific ring for a ceremonial human sacrifice: said bauble belongs to Ringo Starr. The guys (playing themselves) are pursued by the cult around England (London, Liverpool, Salisbury Plain), into the Alps and finally to the Bahamas. In between or in conjunction with the nonstop gags are—naturally—songs, including “Ticket To Ride”, “The Night Before”, “You’ve Got To Hide Your Love Away, and the title tune. Extensive background music was handled by an uncredited Ken Thorne.

Though the tunes are classics and much of the foolishness is clever, the frantic aimlessness eventually grows tiresome: though only running 92 minutes, the kitchen-sink jamming makes it feel longer. Written by Marc Behm and Charles Wood, it’s 200 nuts in search of a bolt, held together by the lads affable charm, sharp turns from supporting pros, David Watkins camerawork and John Victor Smith’s editing. Adding to the do-this-and-fall-down mayhem was that the Fab 4 were also fabulously stoned during it all. ** 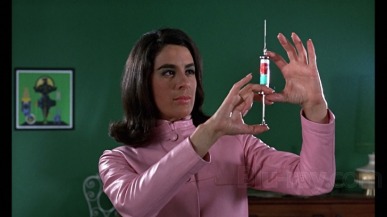 Playing the nonsense in makeup and accents are the masterful Leo McKern (‘as ‘Clang’), Eleanor Bron (with 14 costume changes, as ‘Ahme’), John Bluthal and Alfie Bass. Their masquerade as (apparently Indian and Hindu) cultists displays the actors comic skills, but the taste quotient makes it a hard sell today. ***

* 1965 was stuffed with more than 40 comedies. In their part of that pie-in-face chart the Beatles bested competition for the crowd most likely to buy 45s or LPs: the year’s trio of Elvis flicks (Girl Happy,Tickle Me and Harum Scarum) made money but were tired and trite, as were five wobbly entries in the ‘Beach Party’ cycle. Those creakers from The King and the Avalon stringers were practically old-hat when they came out, while Help!, every bit as slight in terms of a tether to reality, was front-line of the vanguard that turned the 60s into the 70s and beyond, first by influencing the likes of TV shows like Batman and The Monkees (safer Beatles), and then by laying down tracks for later MTV and music videos. 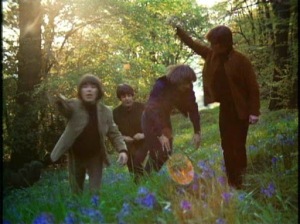 ** Lennon in 1980: “I realize, looking back, how advanced it was…But [Lester] never explained it to us. Partly, maybe, because we hadn’t spent a lot of time together between A Hard Day’s Night and Help!, and partly because we were smoking marijuana for breakfast during that period. Nobody could communicate with us, it was all glazed eyes and giggling all the time. In our own world.”

Ringo: “A hell of a lot of pot was being smoked while we were making the film. It was great. That helped make it a lot of fun…If you look at pictures of us you can see a lot of red-eyed shots; they were red from the dope we were smoking.”

Paul: “We showed up a bit stoned, smiled a lot and hoped we’d get through it. We giggled a lot.” 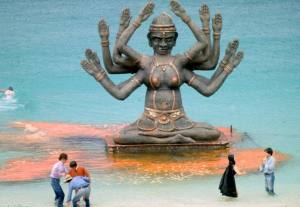 *** On the one hand, the movie can now be criticized (and, sure enough, it is) for its casual lampooning of Indian (or regional) characters and cultural &/or religious aspects associated with the subcontinent, yet at the same time the mystical theme keyed in on the counterculture’s dissatisfaction with Western materialism and fascination with the East, thinking what was missing at home might be found out there. Have Sitar, Will Hash.

Speaking of cults, I have a vivid memory of seeing this at the local theater, age 10. My parents took me; good sports, they’d already survived the Sinatra quake and Elvis tsunami. Nonstop screaming from the packed audience (mostly young girls) was so intense and sustained you couldn’t hear any dialogue. After maybe 15 minutes worth, the manager walked onstage, had the sound turned down and the projection faded from color to black & white. He calmly but firmly let the fan(atics) know that unless they shut up and behaved he’d run the rest of the movie this way. Ah, Beatlemania…. 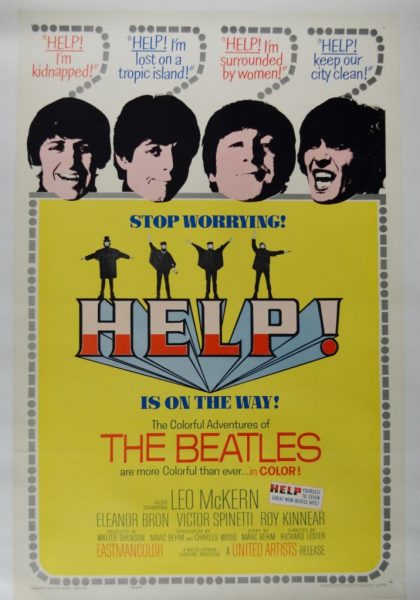 One thought on “Help!”