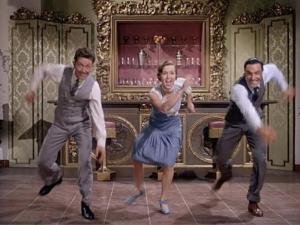 SINGIN’ IN THE RAIN—-hard work never looked so easy. One of the all-time greatest musical-comedies (many think it’s THE Best) did quite well in 1952, a gross of $12,400,000 making it the sixth most popular night out of the year. The Oscars only coughed up two nominations, which was shameful. Its star, Gene Kelly, co-directed with Stanley Donen, from a script written by Betty Comden & Adolph Green. Kelly shares the hoofing, melodies and laughs with Debbie Reynolds, Donald O’Connor and Jean Hagen.

The late 1920s. ‘Talkies’ are the new rage, and ‘Monumental Pictures’ has to get with the, well, picture, and that includes converting an already-shot silent starring popular ‘Don Lockwood’ (Kelly) and ‘Lina Lamont’ (Hagen) into the new sound format. Production headaches abound, and when preview audiences hoot at Lamont’s squeaky diction, Don (who can’t stand the vain Lina) and his best pal ‘Cosmo’ (O’Connor) convince the studio head to rework the movie, from the adventure ‘The Dueling Cavalier’ to a musical, ‘The Dancing Cavalier’, but using the voice of chorus girl ‘Kathy Selden’ (Reynolds) to dub Lina’s hopeless, horrid squawks. Don and Kathy are bit by the smitten bug, but Lina is a vengeful sort.  Will this ever work? There’s glory and glamour galore in Hollywood, but is there room for justice?

Everything works like a Technicolor dream: Kelly and O’Connor dance up a merry storm, and Reynolds holds her own: the 18-year-old 5’2″ dynamo wasn’t trained as a dancer, but after five small parts over three years her first major role showed she had what it took to not just light up the screen with her smile but keep up with driven perfectionist Kelly. An example: the “Good Mornin'” routine took 15 hours to get in the can, with its last shot of Kelly, Reynolds and O’Connor tumbling over the couch going thru 40 takes. Kelly didn’t spare himself: when he did the classic title number, splashing down the street in a downpour, he was running a fever of 103. The movie went 25% over-budget to finally tab out at $2,540,800. *

Hagen’s hilarious performance nicked one of the Oscar nominations, for Supporting Actress; the other was for Original Music Score. Kelly partners with tres sexy Cyd Charisse for the showstopper ‘Broadway Melody’ ballet number; this gam-dzzling exposure moved her status upward. 20-year-old hopeful Rita Moreno is also on hand (with just a few lines). Douglas Fowley, who’d usually been cast as a bad guy in the 190 credits he’d accumulated over 11 years, snags his share of laughs as the director exasperated by trying to work with the clunky new sound system and the head-splitting Lina’s prima donna act and voice from the basement of hell. 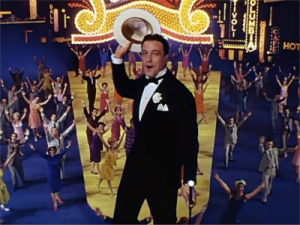 * Debbie: “Singin’ in the Rain and childbirth were the two hardest things I ever had to do in my life.” “Gene was brilliant, but a taskmaster. I’d say he invented the word.”

Gene: “I wasn’t nice to Debbie. It’s a wonder she still speaks to me.” “Fortunately, Debbie was strong as an ox . . . also she was a great copyist, and she could pick up the most complicated routine without too much difficulty . . . at the university of hard work and pain.”