ROAD TO BALI, from 1952, sixth in the series of Hope & Crosby ‘Road Pictures’ and the last until the wan 1961 The Road To Hong Kong closed down the road, by then less traveled. It runs low on steam before the 90 minutes play out, but there’s a good number of laughs on the way, thanks to the ace patter timing of Bob & Bing and the usual harmless silliness factor of the series. Scattered among the asides and physical bits are then-topical jokes that will be recognizable only to those whose memories stretch back to a vastly different zeitgeist. At the time, it grossed $8,300,000, a respectable 18th place for the year, when the durable duo had multiple streams of comic competition to contend with. * 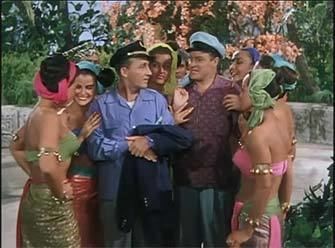 The ‘story’ this time has the guys as song & dance clowners out of work in Australia, talked into taking jobs as deep-sea divers for a prince in (then Dutch) Indonesia. Before things conclude with a volcanic eruption on the title island, they encounter ‘Princess Lala’ (Dorothy Lamour), who for some reason is half-Scottish, and her conniving cousin, ‘Prince Ken Arok’ (Murvyn Vye). The sixth in the series also marks Lamour’s sixth time with them, and has six (mostly forgettable) songs written by written by Jimmy Van Heusen & Johnny Burke. Room is made for cameos from Dean Martin & Jerry Lewis, Jane Russell, Bing’s brother Bob and, in a clip from The African Queen, Humphrey Bogart.

How many countries and cultures can we lampoon in one scene?

The Bing-Bob timing is sharp as ever, even if the due date was somewhat past, and the daffy imaginings of exotic places and cultures are amusing in their sheer outlandishness (p.c. worriers can catch the next cargo tub for the Jerk Archipelago). Lamour was understandably stung when Crosby had her singing re-dubbed by Peggy Lee. The sets and costuming get some extra giggles. Directed by Hal Walker, who’d done previous ‘Roads’ to Zanzibar, Morocco and Utopia and by then probably did whatever the two stars wanted him to; the joke-chocked script was the work of Frank Butler, William Morrow and Hal Kanter. Old movie fans (or old fans of old movies) may recognize the giant squid Bob runs into is our tentacular friend from Reap The Wild Wind.  The volcano finish was lifted from 1941s popular escapism Aloma Of The South Seas, which also featured La Lamour. **

“He’s gonna sing, folks. Now’s the time to go out and get the popcorn.”

Camping it up for the sake of comedy through ‘cultural appropriation’ (no doubt today offending those who seek to be offended) are Peter Coe (Yugoslavian posing as Balinese), Leon Askin (Austrian playing Indonesian), Carolyn Jones (21, her second part, pretending to be Australian), Michael Ansara (Lebanese pretending to be Balinese), Harry Cording (English-American playing Australian) and Barrie Chase (18, dancing, from New York City pretending she’s from Bali). 90 minutes of nostalgic goofiness.

* Team Working——the inclusion of a cameo with Dean & Jerry both acknowledges the (now mystifying) rage for new kids on the block but also gooses that Martin & Lewis were another part of the Paramount Pictures revenue stream, on view and making more money that year in Sailor Beware and Jumping Jacks. Other gagsters still hard at work in ’52 were Bing-Bob contemporaries and unofficial rivals Bud Abbott & Lou Costello, who slammed out Lost In Alaska, Jack and the Beanstalk and Abbott & Costello Meet Captain Kidd.  Those mediocre entries from Bud & Lou were bested at the box office by country cutups Marjorie Main and Percy Kilbride who ran with their established routine in Ma and Pa Kettle on Vacation and Ma and Pa Kettle at the Fair, while poor Donald O’Connor and his talking mule had to make do with Francis Goes To West Point-–digest that there were once six movies about a talking mule. O’Connor could console himself with the triumph of Singin’ In The Rain, while both Hope and Crosby had successful solo scores in ’52, plus their shrewd investments outside showbiz were making them both rajah rich.

** Road to Bali was Hal Walker’s last feature directing assignment. Walker not only directed Hope & Crosby in four of their team-ups, he also had to try and manage Martin & Lewis in four of their early outings (hopefully the money was good). He had also logged a solid career as an Assistant Director on class pictures like The General Died At Dawn, The Palm Beach Story and Souls At Sea (where he drew an Oscar nomination), and handled 2nd-unit direction on Wake Island, China and The Uninvited.