MANSON FAMILY VACATION is a unique and rewarding trip to take, offbeat to say the least, often quite funny, ultimately touching. From 2015, a feature film debut directed, written & co-produced by J. Davis.

‘Nick’ (Jay Duplass), a well-off lawyer in L.A., is discomfited when his footloose adopted brother ‘Conrad’ (Linus Phillips) drops in for a visit, on his way to some vaguely indicated job out in the desert. Seemingly content with being pleasantly weird, Conrad couldn’t be more different than uptight Nick. The two don’t mesh, never really have, but Nick, pushed on by his wife, reluctantly agrees to drive Conrad to his new gig. This is only after submitting to accompanying Conrad on a tour of spots around Los Angeles that figure in the times and crimes of Charles Manson and his ‘Family’. Conrad’s giddily obsessed with the subject, Nick understandably ill-at-ease.

Great teamwork from the two and from tone-right supporting players weave an odd spell around something that at first glance sounds like a questionable idea. Yet it wins you over.  Multi-talented Phillips radiates wounded sincerity. We’re not quite sure what’ behind his fixation on ‘Charlie’, but he’s like a big, exuberant puppy, so how strange can it get? 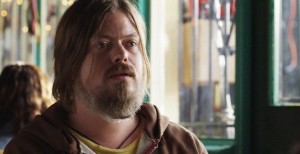