JOE BUTTERFLY is, to be charitable, pretty bad. A 1957 culture clash/service comedy set in postwar Occupied Japan, it suffered to a degree from following on the heels of The Teahouse Of The August Moon, a big hit on similar turf from the previous year. Instead of the estimable talents and box-office bait of Marlon Brando and Glenn Ford from the ‘Teahouse‘, this paper-thin entry has Audie Murphy and Burgess Meredith, gamely struggling under a weak script and uninspired direction. It is more interesting for its backstory details than anything on screen. The most effective piece of dialogue isn’t a punch line, but the simple declaration by one of the Japanese characters (played by actress Keiko Shima) that “it is good not to have to hate anymore.”

1945. Japan surrenders. Among the U.S. occupation force are the staff of the weekly Army magazine “Yank”. They’re ordered to come up with some feel-good articles pronto. The guys run across so-helpful conman ‘Joe Butterfly’ (Meredith), who not only knows how to work the Black Market for hard-to-get essentials but can arrange for comfy digs in an undamaged mansion, complete with female company.

Veteran screenwriters Sy Gomberg, Jack Sher and Marion Hargrove get some credit for touching on the Black Market issue, but the jokes are mostly anemic. The idea itself skirts taste right off the bat, in that Tokyo was in ruins at the end of the war, hardly the setting to generate chuckles. Along with the big hit serious drama Sayonara from that year (set in Japan during the Korean War),1957 was overloaded with service farces: Don’t Go Near The Water, Operation Mad Ball, The Sad Sack, Kiss Them For Me.

Murphy was trying to branch out from his harness in B-westerns: this is his only comedy. He’s okay, and supporting cast members Charles McGraw and Fred Clark struggle valiantly with the material. Undercutting their game efforts are George Nader, Keenan Wynn and John Agar. Nader, as always, is terrible, Agar not much better. Wynn could act rings around either of them, but he’s just in bluster mode here, and it falls flat. No-one is helped by the music score, continually honking “GET IT!” to pound home the gags. It’s another one of Universal’s uncredited paste jobs that used snatches from several composers, this time out including Henry Mancini, who’d done similar unsung jobs on dozens of films. Frequent Murphy director Jesse Hibbs filmed partially in Japan (Tokyo and Yokohama) and Hong Kong. 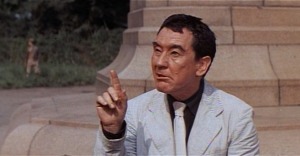 Then…there’s Burgess Meredith’s mincing “yellowface” as the title character. Despite meritorious patriotic WW2 service, Meredith had been off the big screen for eight years, “Graylisted” by the Commie-hunters, getting by with theater work. He’d done ‘Teahouse Moon‘s ‘Sakini’ on stage. While he gets most of the better comic asides in the script, it’s discomfiting to watch him here, on the same cringe-level with his later portrayal of a Navajo in 1968’s lame Stay Away, Joe. Interesting choices, to say the least (most?) from someone who could deliver superb character work, as in the Rocky series, The Day Of The Locust and many other films and TV episodes. Doubtless, he meant well by Joe Butterfly, but it doesn’t go down as his finest hour.

A box-office take of $3,700,000 put it 67th place for the year. With Reiko Higa (a few smiles as a fake ‘Tokyo Rose’), Herbert Anderson, Eddie Firestone and Mike Connors. John Agar flanked this between The Mole People and The Brain From Planet Arous, immortal sci-fi goofs that are much funnier than this intended comedy. 90 minutes.