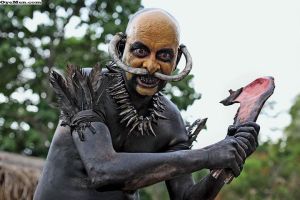 THE GREEN INFERNO elevated the warped Horror flick sub-genre that feeds off people-eating, paying grisly homage to exploitation garbage from Italy in the 70s & 80s that spawned a mini-cult around slop like Cannibal Holocaust. Eli Roth, purveyor of perversions such as Hostel, took a cast of menu items into Peruvian jungle to garnish this 2013 depravity feast with an actual budget (the earlier gunk being cheap in every way), and more graphic and repulsive effects.  Besides directing, Roth cooked up the story, co-wrote the script and was one of the producers of a $5,000,000 taste test. Filming in Peru and Chile took place in 2012, but after some film festival dates, release was delayed until 2015, when enough zombies filed in serve up a $12,900,000 gross. Gross, indeed.

College freshman ‘Justine’ (Lorenza Izzo) feels challenged enough by brash activist ‘Alejandro’ (Ariel Levy) to join his militant environmentalist protest team on a trip to the Amazonian rain forest where they will film themselves in a standoff with a petrochemical consortium logging the region and dispossessing the native tribes. When their small plane crashes into the jungle, Justine, Alejandro and the survivors find that the Indians they went there to support have markedly traditional ideas about harvesting food and displaying hospitality.

One by one, the hapless eco-warriors are prepped to sate the prehistoric appetites of actual warriors, and bemuse the hell out of the tribe’s women & kids. Stomach-churning gruel at least offered the makeup crew, headed by Ozzy Alvarez, the chance to design some impressively fearsome looks for the hungry locals. Miss Izzo does well enough conveying terror and the plane crash is suitably jarring. As far as ‘elevating’ the subgenre into something licking at mainstream, this gag-reflex opus pretends to have some spice of social commentary beneath the main course of pain. That specious justification is a steaming crock of Roth, and his dialogue is infantile enough to have been scrawled in crayons, by the age group that would normally use them. 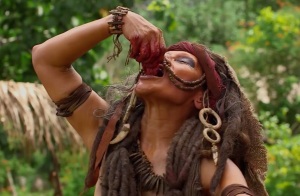