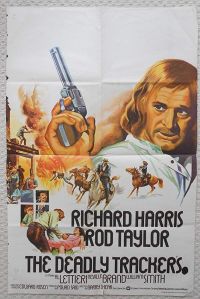 THE DEADLY TRACKERS is so dead-bad lousy it only rates mentioning for the array of talents involved, all coming to grief over the results. It started with one of movielands more colorful mavericks, Samuel Fuller. He wrote a western revenge story called “Riata”. By the time it was released in 1973, the title had changed, the director, script/s and cast had changed, location shooting had changed from Spain to Mexico and the eventual pasted together slop got bad reviews and barely made it to 158th place on the year’s box office list, with a gross of just $800,000, a few of which I regret to say were my own. 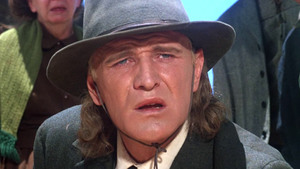 A vicious outlaw (Rod Taylor) and his gang rob a bank and in the process kill the wife and young son of the sheriff (Richard Harris). Pursuing the killers into Mexico, the sheriff crosses paths with a Mexican lawman (Al Lettieri) intent on justice rather than revenge. It’s a dispiriting bloodbath, brutal and ugly without letup. 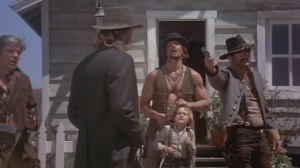 Fuller began shooting in Spain, with Harris. Warner’s shut down production, Fuller was out. The studio sold the material they had to Egyptian producer Fouad Said, and renewed filming began in Mexico. Barry Shear (Across 110th Street) took over directing. Lukas Heller (The Dirty Dozen) was assigned to rewrite Fuller’s script. Harris stayed aboard, other cast members were dumped. Along with Taylor (who did some writing on it) and Lettieri, joining the new cast were Neville Brand (his bad guy, called ‘Choo Choo’, has a piece of railroad tie for an artificial arm), William Smith (wide-eyed as a mute psycho) and Paul Benjamin. Heller disowned it. Fuller was furious, crushed that his idea had been hijacked and bastardized. The score, which went uncredited, made liberal use of (as in, outright stealing) Jerry Fielding’s soundtrack from The Wild Bunch. *

With Isela Vega, William Bryant and Pedro Armendariz Jr. A clusterf-d situation all-round. You’ll need a shower when it’s over to wash away the stink. 110 minutes.

* Fuller, from his autobio—“Riata is probably one of the best scripts I ever wrote. It hit on all the themes I loved telling stories about. Father-son relationships. Outlaws and lawmen. Revenge and forgiveness. Fidelity and betrayal. Violence and peace. Love and rancor. Sacrifice and satisfaction.”   Whatever qualities Fuller’s original script may have had, you wouldn’t know it from the awful movie that crept out on the other end.