RIDE CLEAR OF DIABLO unless you’re in a lazy yesteryear mood for a standard Audie Murphy western, this one from 1954. Nothing to write home to Ma about, but worth some smiles for the familiar faces in the cast and some badinage between Murphy’s hero ‘Clay O’Mara’ and bad guy-turned-good-guy-helper ‘Whitey Kincade’, played with his usual merriment by Dan Duryea.  WHITEY: “If I was smart, I’d shoot you right now. Except I think I’ll keep you around for awhile…just to see what makes you work.”  CLAY: “Maybe you’re getting soft, Whitey. Maybe you’re turning into a human being.”  WHITEY: “If I ever feel that coming on, I’ll shoot myself.” 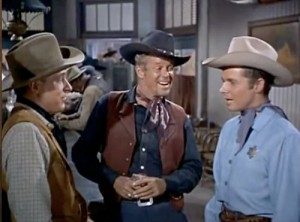 Directed by Jesse Hibbs, the first of six Audie Murphy pictures he’d steer (including the big hit To Hell And Back), written by George Zuckerman, its revenge fodder came in 71st for the year, grossing $4,300,000. 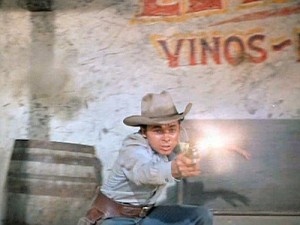 Near top of list of guys you do not want to pick a fight with: Audie Murphy. Ask 250 Nazis.