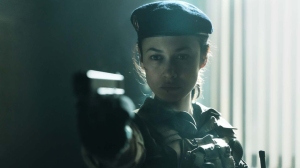 SENTINELLE, from ’21, has Olga Kurylenko at 41 stepping into the dish-it-out actionista province usually patrolled by Charlize Theron (or take your pick), avenging her way through 80 minutes of payback directed by Julien Leclercq. His handling of the fight material is okay, but the narcoleptic script he co-wrote with Matthieu Serveau is barely there, existing only as a blueprint for the imposing star to strut the vengeance catwalk.

After some traumatic mission duty in Syria, French Army interpreter ‘Klara’ (Kurylenko) is transferred back to Nice, where she does patrol duty as a trooper for Operation Sentinelle, on the watch for terrorist activity. PTSD and drugs to calm her nerves have her on edge as it is: then her younger sister (Marilyn Lima) is savagely assaulted after a night at the disco. Informed that the Russian oligarch perp/s have diplomatic immunity, she uses her combat training and goes rogue.

Kurylenko makes what she can of the threadbare material: she and location filming in Nice, Brussels and Casablanca are just enough to hold it together. Plausibility is absent. Beyond wanting to maim the creeps who hurt her sis, she’s not into men to start with, an excuse for a girl-girl sex scene added for no particular reason other than that the dudes who make these movies with women kicking men to pieces also insist their heroines make out with another hot woman in between brawls. To its credit, the script doesn’t make anything one way or another about her partner choices other than to use them as a lazy prop for tease filler. She does get to have a knockdown drag-out with a lady assassin at one point, because, well, just because. Let’s see—Salt, Ava, Hanna, Haywire, Atomic Blonde, Kill Bill, Colombiana, Elektra, Aeon Flux, Lucy, Peppermint, Nikita, Ethel (will you really try to find Ethel?)…..

Budget was around  EUR6,000,000. With Michel Nabokoff and Carole Weyers. 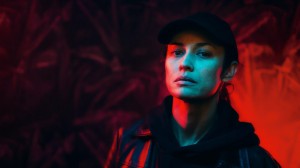