SIR, written & directed by Rohena Gera, enjoyed film festival success in 2018, followed by some international bookings that grossed $1,050,318, but Corona virus prevented wide release in India and the United States. The enchanting Tillotama Shome, looking barely older in 2018 than she did in her charming debut in Monsoon Wedding sixteen years earlier, plays ‘Ratna’, a childless widow who left the constricting life in her rural village for a thin sliver of chance in Mumbai.

Ratna has dreams of becoming a fashion designer. She makes do (and dutifully supports her younger sister back home) by working as a live-in maid in the posh apartment home of ‘Ashwin’ (Vivek Gomber), a kind and well-off young man whose marriage plans just went up in painful smoke. Gradually, the two become more and more fond of one another, but the needy heart is a fragile vessel to dash against caste differences set in stone hardened by centuries. 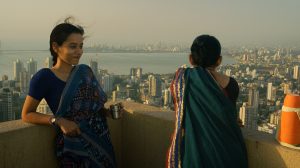 Wonderful little story, exquisitely acted, brings 99 minutes of delicately observed humanity to cling to during a rough patch, and bobs like a life raft of decency in a current cinema (and cultural) sea of cynicism and excess. Shome is a treasure. Someone who could watch this and be unmoved isn’t anyone I’d want to be around. With Geetanjali Kulkani, Dilnaz Irani and Anupriya Goenke. 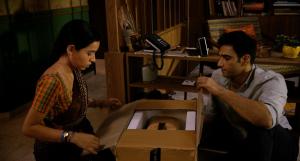