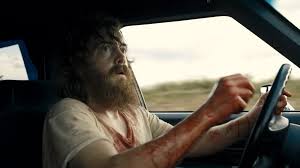 BLUE RUIN, written & directed in 2013 by Jeremy Saulier, dominated by a mesmerizing lead performance, upends shopworn revenge thriller clichés and puts pain-torn humanity into the equation along with the expected piercing implements. It takes the Man’s Gotta Do theme out of the steely-eyed, aim-steady, quip-dispensing realm of the buffed-up brood chain dominated by Arnold’s, Bruce’s and Sylvester’s. In doing so, it invests us in the obligation and costs of soul-scarring justice via the shaken spirit and shaky hands of an ordinary flesh & blood victim. Saulier’s stripped-down drama punches above its weight. *

“Hey, man, I know this is personal. That’s how you’ll fail. No speeches, no talking. You point the gun, You shoot the gun.”

Shattered by the double-murder of his parents, ‘Dwight Evans’ (Blair) emerges from years of grief-enforced exile when he is notified that the killer will be released from prison. Guided by no plan beyond passion’s primal logic of cause & effect, Dwight exacts retribution, but that in turn provokes retaliation from the killer’s family, now bent on a vengeance quest of their own. Things will end, not “well”, but perhaps as they must.

Pooling cash, maxing out credit cards, refinancing homes, and turning to Kickstarter, the final budget for Saulier’s make-or-break project came to just over $420,000. Box office returns amounted to $977,625, but more importantly, critics and industry poobahs took notice and a gifted writer-director who’d been on the verge of packing it out was instead propelled on his way up. Likewise his star, childhood friend Macon Blair, who also produced the picture, saw his career as actor, and as a writer and director in his own right, take flight. 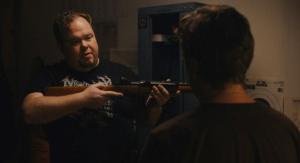 Blair’s soft-spoken delivery, unassuming body-next-door presence, and the tremulous emotions behind his eyes make his everyman Dwight—groping his way through an honor mission laced with uncertainty—into an unlikely vigilante hero, and all the more affecting as a result. There’s a great, naturalistic supporting performance from Devin Ratray—comic, touching and flat practical—as a high school friend who has the wherewithal and willingness to see that the outmatched Dwight at least has a fighting chance.

Shot in Virginia and Delaware. With Amy Hargreaves, Kevin Kolack, David W. Thompson, Stacy Rock and Eve Plumb (‘Jan Brady’ to you TV sitcom vets). 90 minutes—all it needs to get the job done and leave you thinking about it.

* A vigilante team composed of boys named Arnold, Bruce and Sylvester sporting muscle shirts and buzz cuts?  Instead of busting into a warehouse and scorching pallets of coke, they’d be more likely to crash a jazzercize studio and complain about the fronds.