CLASH OF THE TITANS shows that up on Olympus (in the Warner Brothers wing of it) mighty Zeus has a long memory and a habit for nursing grudges. Thus it was commanded that $125,000,000 from the peasants tribute bowl would be bolted into this 2010 remake of the accursed 1981 version, hoping it would be a better-received Greek gift than that wheezer. While the script’s battery of today-speak dialogue isn’t a threat to Homer—“One day, somebody’s gonna have to make a stand. One day, somebody’s gonna have to say enough“—the cast is more able and three decades of advances in special effects help save Perseus & Co. for a new generation of kids. *

When the ‘aren’t-we-advanced’ ruling toffs and grimy mobs of Argos rebel against the whim-rule of ‘The Gods’, ever-scheming ‘Hades’ (Ralph Fiennes) convinces ‘Zeus’ (Liam Neeson) to threaten the little folk with destruction: cue the slumbering K-kritter. Vengeance bent, demigod ‘Perseus’ (Sam Worthington) leads a band of warriors to battle destiny in the Underworld: going literally to Hell and back. Along the way are name-drop cameos by a dictionary of gods and goddesses, kings and queens. Their pithy observations make way for combat with the Furies, Stygian Witches, ugly brute Calibos, giant scorpions, Djinn sorcerers, snaky gorgon Medusa, and finally, what everyone dreads—and paid to see/stayed awake for—the titanic and beyond-pissed Kraken. But only after hearing Liam Neeson give forth with its “RELEASE…” command.

The CGI, while a bit on the obvious side, is suitably impressive, extra kudos to the scorpions and Medusa. Worthington is a much sturdier Perseus (and better actor) than Harry Hamlin was in the earlier picture, and the supporting cast do their jobs well, especially Mads Mikkelsen, investing due authority and gravitas as the main good guy on Team Perseus. The script gets a solid laugh out of quickly dispensing with ‘Bubo’, that idiotic mechanical owl that was such an irritant in the mists of ’81.

Louis Leterrier directed, piling on the action. Heaving ho with exclamation points, the script was done by Travis Beacham, Phil Hay and Matt Manfredi. Scored—crashing on the clashing—by Ramin Djawadi.  Shot with an accent on swooping by cinematographer Peter Menzies Jr., in England, Wales, the Canary Islands, Ethiopia and Iceland. When tallies told, it came in 14th in the States, 11th worldwide, with a gross of $429,214,888. Worthington, Neeson and Fiennes reunited two years later for Wrath Of The Titans, which didn’t fare as well. 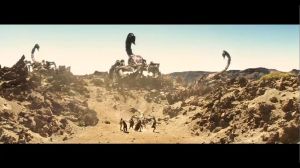 * Those of us who revere 1963’s Jason And The Argonauts saw it as children: wonderfully, it was done with such style that its spell still holds. With another 18 years under our togas, we were let down by the 1981 Clash/thud, which not only failed to thrill with its creatures, it insulted us with that Gods-damned owl and further bummed guy mortals by being chintzy with Ursula Andress’ cleavage. Still, kids of the early 80s enjoyed it, and that’s the main audience for this kind of fantasy frolic anyway. As an “elder” (“By the goatbeard of Hermes! I’ll show you how to spear a be-hoofed whatever”) enduring the hoary declamations, buzzsaw editing and vanquishing noise level can be A Myth Too Far. Yet again…descend from your high-Pegasus and acknowledge that if you were five or ten you’d think this was the greatest thing since that other blockbuster you saw last week. So, it gets a pass. However that does not mean we will sacrifice a couple of our puny-mortal hours to Wrath Of The Titans: wincing through that would likely require enough stomped grapes to stun a Spartan.