THE GIFT—–“You see what happens when you poison other people’s mind with ideas?” Joel Edgerton proved himself as more than a compelling acting talent in 2015 by skillfully writing, directing and co-producing this penetrating psychological suspenser in which he co-stars with Jason Bateman and Rebecca Hall.  Earning positive reviews, at 61st place the gross of $58,979,000 made his surprise gifts a hit, tightly wrapped and delivered for a trim $5,000,000. “See, you’re done with the past, but the past is not done with you.”

Transplanting from Chicago to L.A., self-assured hi-tech salesman ‘Simon Callem’ (Bateman) and his demure wife ‘Robyn’ (Hall) are moving up, first into a lovely hillside home, then with Simon’s nailing a key position in his company. Robyn suffered a miscarriage with ensuing depression & medication issues, but they look to be putting loss and stress behind them. When they bump into ‘Gordon Mosley’ (Edgerton) a high-school acquaintance of Simon’s, a guy he hasn’t seen for 20 years, it seems as though they’ve made an instant friend as well, helpful in a new city. But “Gordo’s” welcoming presents and thoughtful favors move past kind and unexpected into persistent and creepy. Robyn begins to wonder if Simon has told her everything he knows about his former classmate.

Relationship-intruder movies are a dime a dozen: it’s all in how they’re handled. Edgerton wisely employs rising unease to coat our expectations of dread and revelation rather than resorting to trope shocks and needless violence. The twist ending carries an icky punch that, either or both rewards and/or repels the viewer’s individual projections. His direction is smooth, and he ensures the film has a sleek visual palette—that knockout SoCal hillside house is located at 15615 Castlewoods Drive in Sherman Oaks. Caught between opposing forces, Hall is fine, but the quiet, unnerving power dynamic comes from Edgerton’s subdued but substantive menace as the elusive Gordo and Bateman’s bob & weave, chameleon-effect charisma, giving several shades to the less-than-simple Simon. 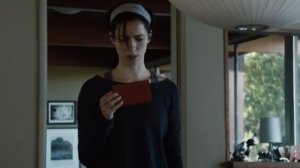