BEASTS OF NO NATION is one of those splendidly done movies on a deeply distressing subject, the kind whose scope and trauma demands attention, yet while receiving it from critics, can barely register a pulse from the paying public. Child soldiers, somewhere in Africa? No heroes? No happy ending? Good luck. The cancerous tragedy of crises-exhausted indifference. “Our country is at war and we are having no more school, so we are having to be finding ways to be keeping busy.”

Civil war consumes a country in West Africa. His village caught between opposing forces, his family fled or decimated, 11-year-old ‘Agu’ (Abraham Attah, debut) is captured by a battalion of rebel militia, mostly children, led by ‘The Commandant’ (Idris Elba). Given no choice if he wants to live, Agu undergoes dehumanizing training and participates in increasingly merciless combat experiences.

“Bullet is just eating everything, leaves, trees, ground, person. Eating them. Just making person to bleed everywhere. We are just like wild animals now, with no place to be going. Sun, why are you shining at this world? I am wanting to catch you in my hands, to squeeze you until you can not shine no more. That way, everything is always dark and nobody’s ever having to see all the terrible things that are happening here.“

From 2015, written, directed and photographed by Cary Joji Fukunaga, bringing the same focus on precise casting, rich background detail and insistence on humanistic immediacy that graced Sin Nombre, his 2009 debut immersion into another jagged piece of the world’s logic-baffling emotionally scarring puzzle.

Filming in Ghana, Fukunaga blasted through the shoot in 35 days, and through skillful marshaling of the expansive backgrounds and large number of extras (including many former child soldiers) makes the $6,000,000 production look much larger than its modest price tag would indicate. The harrowing action scenes are superbly done, and Dan Romer’s shimmering score is lovely, stirring and mournful. 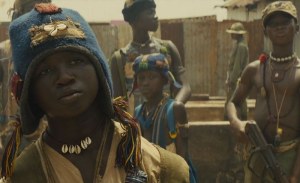 The kids are literally naturals, and Attah is remarkable. Fukunaga, on the 14-year star, plucked from the streets of Accra: “…was essentially a street vendor before we shot the film….zero film experience, little education…but he became a somewhat professional actor, which was astounding to watch.” Gratifyingly, Attah was not only praised for the role, but has gone on to act in other pictures. Sometimes good things happen. 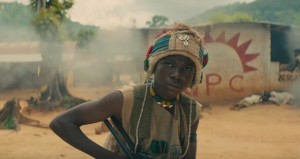 Elba is magnificent, his Commandant an inspiring tyrant, by turns ferocious, beguiling, sonorous, gentle, cruel, funny, practical, horrid: a grand and charismatic, terrible and unforgivable character, a towering performance overlooked for what should have earned him an Oscar nomination.

Elba and Fukunaga also worked as producers, along with no less than 26 various co & executive producers. Theater chains boycotted the film as a protest to its simultaneous release online: possibly this helped kill Oscar consideration. 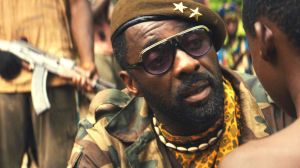