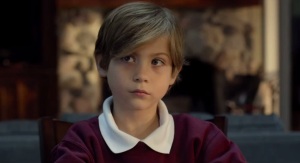 BEFORE I WAKE , a good-looking but unsatisfying supernatural excursion into the power of dreams, shares a commonality with many of our interior trips: a logic-defying idea, happy or sad, goes only so far before it falls apart into shards of Can’t Be, just before you open your eyes to realize that the There-there wasn’t there after all (inject something faux profound here about the post-coffee & shower walking nightmare of Real Life).

Hoping to heal the loss of their own little boy, ‘Jessie’ (Bosworth) and ‘Mark’ (Thomas Jane) adopt 8-year-old orphan ‘Cody’ (Jacob Tremblay), whose previous foster home experiences have been ‘less than successful’. He’s a sweet kid, with a curious habit of trying not to sleep. To their delight, when Cody does conk out, his dreams summon beautiful butterflies, and then, more startling and wondrous, appearances of their deceased child. But when Cody’s night-thoughts turn bad, so do the images they witness and the toll they take.

Directed by Mike Flanagan, who co-wrote the script with Jeff Howard, the film benefits from some charming visual effects (the butterflies), solid supporting players in Annabeth Gish, Dash Mihok and Jay Karnes, and especially the poignant charm emanating from the young and gifted Tremblay (nine at the time).

But contesting weak links are the shallow characterizations of Jessie and Mark, both as written and performed, a rather cheesy scare-element (the demon of the piece) that’s not all that frightening, and then there’s the unanswered huh? of how exactly did their fairly sizable child–looking to be around five—manage to drown in a bathtub in the first place?  Bosworth plays the entire film with in one note, and Jane, with a Tarzan haircut, isn’t much better: the characters are ciphers. Even within the range of the material, the adult behavior in the face of such phenomena, danger and grief makes no sense. Ultimately, it’s a sleek but empty exercise. Grosses came to $4,938,000. 97 minutes. Dream on.