NATURAL BORN KILLERS twisted spree was the 25th most-attended movie of 1994, but the nasty tone of its pitch-dark satire, a finger-in-eye indictment of societies love affair with fame and violence, generated considerable negative blowback. Not much of a date movie, though no doubt people like its gun-crossed lovers would find it an aphrodisiac. A Pill Too Far.

‘Mickey & Mallory’ (Woody Harrelson and Juliette Lewis) are nuts about each other. Accent on nuts, as when they’re not nuzzling, they engage in a free-wheeling rampage of serial killing that racks up dozens of victims. Celebrity status is fanned by the nations voracious press coverage. 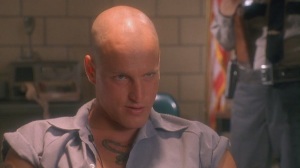 His marriage deteriorated, Oliver Stone was in a bitter frame of mind when he directed this hallucinatory screed, which goes past scathing into scything. Taking a story and script originated by Quentin Tarantino, then revising it with Richard Rutowksi and David Veloz, Stone stages a full frontal assault on the sort of TV-fed lunacy the country was breeding and lapping up by making media sensations out of murderers. Taking the visual format into hyperdrive with a dizzying mix of film stocks, clips and editing that barely pauses for breath, it’s initially startling, then fitfully amusing (in a caustic way) before it turns agitating, eventually numbing. You “get it” from Scene 1: by the time the full 119 minutes have raged by, you feel like you’ve been mugged, then were arrested instead the perp.

Trash-evoking Harrelson and Lewis (about as appealing here as a head wound) make for adroit casting. Robert Downey Jr. has a Oz-accented field day as a Geraldo-ish tabloid journalist, and Rodney Dangerfield figures in a sickly funny segment lampooning coarse TV sitcoms. Tommy Lee Jones goes ape-poo overboard as a prison warden, while Tom Sizemore plays it straight and creepy as a psychotic detective. Other than two of the hapless victims (between them Corinna Laszlo and Lorraine Farris get about two minutes to shed clothes and get murdered), there isn’t anyone else in the movie who warrants sympathy. A feast of technique, a famine for hope. *

Shooting in New Mexico, Arizona and Illinois (inside a state pen), Robert Richardson manned camera, his 9th of 11 assignments with Stone. Film editors Brian Berdan and Hank Corwin toiled 11 months piecing together material from the 18 different types of film stock employed: the movie contains 3,000 cuts, five times as many as the average feature picture. 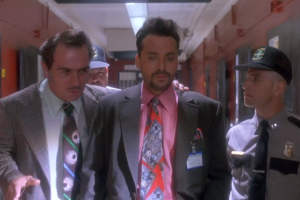 * On casting Harrelson and Lewis the director offered: “Frankly, he had that American, trashy look. There’s something about Woody that evokes Kentucky or white trash….Juliet has malice in her eyes. She’s got adorable eyes, but they jump and gleam.”

Nailing white trash is on the nose–any trip to the store provides your fill—but singling out Kentucky is un-cool. I happen to know some lovely, done-to-earth folks from Kain-tuck. No, not Mitch McConnell–I mean actual human beings. 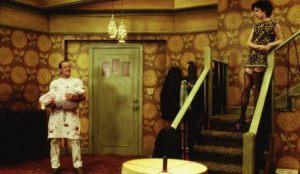 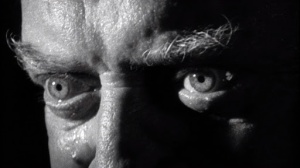