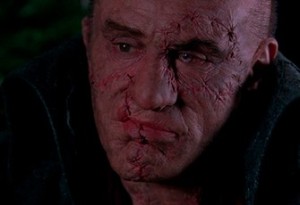 MARY SHELLEY’S FRANKENSTEIN may be somewhat more faithful to the gist of Mary Shelley’s 1818 book than other adaptations, but this extravagant, melodramatic 1994 version, wildly over-directed by its scenery-gulping star, Kenneth Branagh, is, with a few exceptions, a real mess. Relying on serial injections of adrenaline, unable to decide where to stick either brain or heart, it’s a transplant operation that leaves the audience in stitches. *

Taking place over 1773-94, the Frankenstory ranges from Bavaria and Switzerland to the Arctic Sea, as self-styled scientist/medical student ‘Victor Frankenstein’ (Branagh) brazenly seeks to expand theory into practice, by creating a human life, reanimating the dead from a mishmash of collected parts. His hubris enacts a cost: lives, souls, sanity. 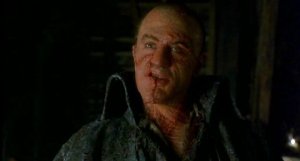 As a genre-honoring follow-up to his hit two years earlier with Bram Stoker’s Dracula, producer Francis Ford Coppola & partners pumped $45,000,000 into the effort, written by written by Steph Lady and Frank Darabont. Along with Branagh—hot from directing and/or acting in Henry V, Dead Calm, Peter’s Friends and Much Ado About Nothing—the cast boasted Robert De Niro (as ‘The Creation’), Helena Bonham Carter, Tom Hulce, Ian Holm, Aidan Quinn and John Cleese. Filming was done in England and Switzerland.

Credit where due—laboring under the elaborate makeup, De Niro does a fine–and thankfully subtle—job etching the Creation’s  capacity for understanding, his unfathomable pain and commensurate rage. Cleese, whose casting would seem counter-intuitive to the material, shows himself as keen with drama as comedy. An Oscar nomination came for the Makeup. The accordingly sweeping score (per the tempo of the piece) from Patrick Doyle was his 4th collaboration with Branagh. As of 2020 they’ve worked together on 15 features.

—-and then….Branagh speed-dials his performance (and that of Carter) to not only reach rafters but shatter them, and paces nearly everything else that cries out for a measured melancholy and rams it across like an MTV-generation video. His half-clothed grandstanding (why?) not sledgehammer obvious enough (cue screams of “Nooooo!” ), it also looks as though he never met a swooping camera he didn’t like. This enjoins cinematographer Roger Pratt to execute enough twirl-around-the-chatting-characters moves that it begins to feel like that giddy game of spin-yourself kids play, the one that can be fun or might also just make you barf. Plot holes the size of caverns are convulsively leapt to get to the next failed chain-yank at emotions, and even within this sort of fantasy’s suspension-of-disbelief requirement, things don’t add up: that fire-immolation of Bonham Carter, which somehow instantly ignites an entire palace-sized home— were Swiss country estates coated with gelignite? The film is undisciplined. 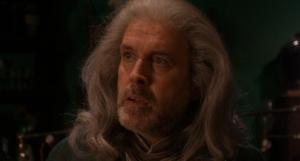 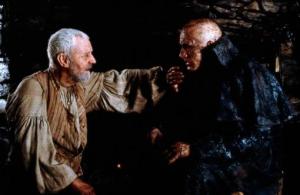 * Frank Darabont: “….the best script I ever wrote and the worst movie I’ve ever seen.” “There’s a weird doppelganger effect…It’s kind of like the movie I wrote, but not at all like the movie I wrote. It has no patience for subtlety. It has no patience for quiet moments. It has no patience period. It’s big and loud and blunt and rephrased by the director at every possible turn….I don’t know why Branagh needed to make this big, loud film … the material was subtle. Shelley’s book was way out there in a lot of ways, but it’s also very subtle. I don’t know why it had to be this operatic attempt at filmmaking. Shelley’s book is not operatic, it whispers at you a lot….[Branagh] really took the brunt of the blame…which was appropriate….If you love that movie you can throw all your roses at Ken Branagh’s feet. If you hated it, throw your spears there too, because that was his movie. “

Branagh: “It was bruising. I stopped reading the notices when I realized what was happening. I’ve had hostile reviews before, but these were very hurtful and personal. In a sense it was impossible for me to remain sane if I was to identify with any of that hostility. You can’t do anything about people being irritated by you or what you are. But some people didn’t like the movie and that’s fair enough. I don’t know what lesson one learns. De Niro gave a brave performance.”