THE TANKS ARE COMING, bringing with them several hundred tons of Army-loaned vehicles, ample reserves of stock footage and a battalion load of crapola in terms of realism about what a cinch it was to clobber the ‘Krauts’. Set in France and Germany, it was shot in Kentucky, where Ft.Knox is located. The base was thoughtfully designated by the Pentagon to provide all the gear for this 1951 hoo-haw, its WW2 saga marketed for Korean Police Action bummed audiences (and naive future recruits), with tag-lines announcing that this was “The Happy, Scrappy Story of those Hit-‘Em-First Heroes!”  You wonder why half the country will walk over a cliff when some draft-dodging fake with a megaphone waves a made-in-China flag and says “jump!”?

1944, the U.S. 3rd Armored Division (Patton’s “blood & guts” donors) starts its drive across the Siegfried Line into Germany. A hard-case sergeant (Steve Cochran) takes over a veteran tank crew. He’s gifted with reckless fighting ability and being able to somehow get away with insubordination of the sort that would get an actual soldier 20 years in Leavenworth. As well as sporting as bogus a Texanized accent this side of Merry Melodies, ‘Francis Aloysius Sullivan’ also finds time to make fresh with a lady correspondent (Mari Aldon) who drives her jeep around the front lines like there’s nothing pesky going on besides World War Two. His wisecrack-loaded crew includes ‘Danny Kolowicz’, ‘Lemchek’, a kid named ‘Eisenhower’ and ‘Heinie Weimburger’.

Tank fanciers (face it, those monsters are impressive, in a brute force way) will appreciate all the Sherman’s, but actual combat vets (scant few left from that time) would wince at the action scenes, plentiful but painfully bogus: amazing how those superior German tanks (one Panther or Tiger worth a dozen of the criminally thin-skinned Sherman’s), their supporting artillery of deadly accurate 88s and whole companies of continent-conquering Wehrmacht troops could be so easy for sassy Sully Sullivan and his happy scrappers to wipe up. I thought this movie was super cool– when I was six years old. Too bad that in the interim a little reading got in the way. 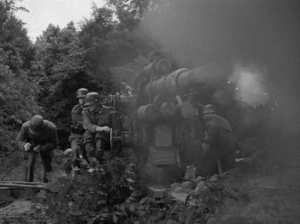 Dramatically, the script, by Robert Hardy Andrews, is hogwash. A real armor ace, Lafayette G. Pool, filed a million dollar lawsuit against Warner Brothers for plagiarizing his story (alas, he lost: can’t beat Warner Brothers when the Pentagon is on their side). The gung-ho narration is by Art Gilmore, his omnipresent voice instantly recognizable from coming-attractions stuff and TV blurbs. The massively prodigious (546 credits) William Lava contributes a bombastic score. The story is credited to Samuel Fuller. * 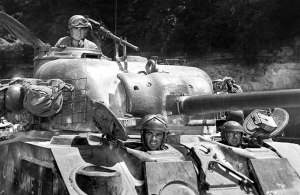 * Fuller didn’t bother to mention this dog in his salty memoir, “The Third Face”, and no wonder. It does feature a character named ‘Lemchek’: Fuller put that name to a player in all of his scripts, a tribute to a fellow vet. That same year he directed two highly-regarded combat movies about the intensifying Korean War, Fixed Bayonets! and The Steel Helmet. As that unpopular conflict raged, 1951 saw The Big One (the one that made sense) revisited in The Frogmen (underwater demolition teams), The Wild Blue Yonder (B-29 crews) Operation Pacific (submariners), Submarine Command (duh), Flying Leathernecks (Marine fighter pilots), Go For Broke! (famed Nisei regiment) Force Of Arms (G.I.s in Italy), Up Front (cartoonist Bill Mauldin’s beloved ‘Willie & Joe’) and The Desert Fox (respected enemy general Rommel). That array is a mix of good and bad, but the most impressive war film of the year (nominated for Best Picture) was the superb Decision Before Dawn (German volunteers work for us behind enemy lines). 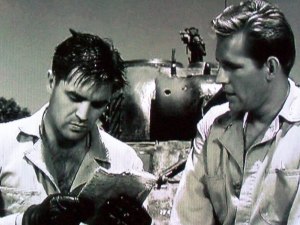 Tank-wise, opt for Sahara, the classic Bogart actioner from 1943, Fury, the exciting Brad Pitt epic from 2014, and The Beast, with Jason Patric, from 1988, about a Russian tank crew trying to survive the Soviet quagmire in Afghanistan. Russia, then, from 2012, offers White Tiger. If you don’t give a fig about historical accuracy and just want to gawk at a bunch of Spanish dictator Francisco Franco’s U.S. supplied M-47s, go for 1965s big-scale Battle Of The Bulge. As for The Tanks Are Coming: propaganda in knife-to-throat wartime serves a purpose (cue Sahara), and there’s nothing wrong with saluting the men who served in those death-traps, but it’s another thing to make it look easy. The men who died in them, and those who made it out alive, deserve better.