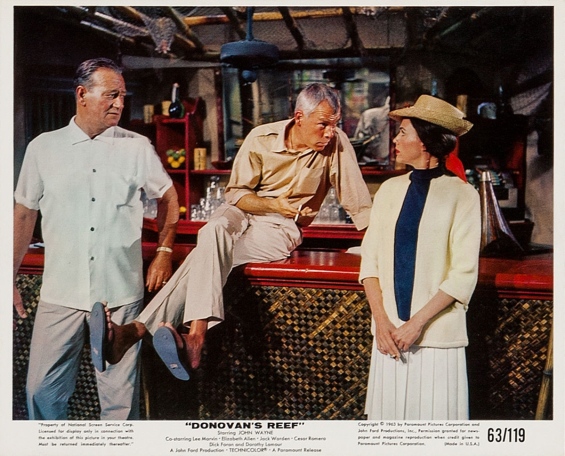 DONOVAN’S REEF, director John Ford’s last of 14 feature films with his favorite pupil, John Wayne, was intended as a nothing more than an overgrown kid’s lark, a slaphappy sentimental 1963 romp with old friends and a select few new ones. He called it a “spoof picture, a whammy, crazy sort of thing. We’re not trying for any prizes.” His selling point to co-star Lee Marvin: “Don’t you want your kids to be as brown as berries? Don’t you want to spend eight weeks in Hawaii this summer?”  V-for-Victory gets vicarious valediction, in a locale reminiscent of former glories. An idealized past may be rapidly slipping into an unwelcoming future, but it’s not going without a few friendly brawls. As Marvin prepares to hurl a bottle of booze at Wayne, Duke has the good sense to remind him “Not the BRANDY, you dope!”  P.C. cringers will sneer—because that’s about all they’re good for. *

‘Haleakaloha’, French Polynesia.  Literally washing up ashore, “Boats” Gilhooly’ (Marvin) arrives for his ritual annual brawl with former sea-mate “Guns” Donovan’ (Wayne): they share the same birthday, Dec.7th—so breaking furniture over each other is a given. Beyond throwing haymakers at his pal, normally genial saloon-owner Donovan has to run interference for another Navy alumnus, “Doc” Dedham’ (Jack Warden), when ‘Amelia’ (Elizabeth Allen), Doc’s uptight daughter from Boston, shows up to settle who gets the family fortune. She doesn’t know her estranged father has three mixed-race kids from his deceased native wife. Will it be up to Donovan to ‘enlighten’ Amelia? (inject a flying DUH!) Six decades after the fact, will Amelia’s faux-enlightened & thrice-uptightened ‘woke’ descendants self-engender strokes watching this? (inject who-gives-a-flying-F-word). 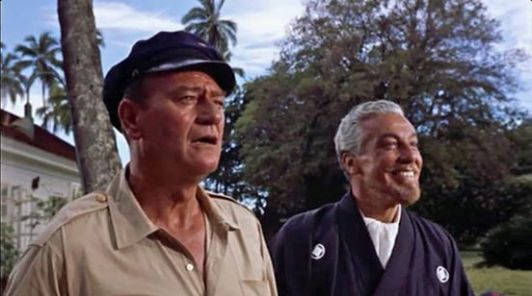 The script by Frank Nugent and James Edward Grant plies the obvious battle of the sexes setup and guys-being-boys framework with a subplot of racial prejudice, cut-to-fit for the era and likely audience. Along with Wayne, and new Ford muses Marvin and Allen, are old hands Cesar Romero (oozing suave as the governor), Dorothy Lamour (back in a sarong: other than a cameo, she’d been offscreen for a decade), Marcel Dalio (doing his flustered Frenchman thing), Mike Mazurki (bored gendarme) and Dick Foran (a gift bit in the saloon brawl). Marvin is just there as a spirited comic foil, playing off Wayne to a tee, as he’d just done in The Comancheros and The Man Who Shot Liberty Valance. Only Warden seems out of place, a filler role for plot purposes. Wayne and Allen team well: 5’9″, with striking patrician features, she more than holds her own, standing up to the guff as well as Maureen O’Hara. 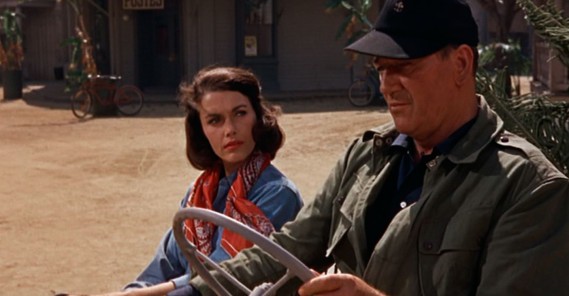 The bygone horsing around kicks off with the swaying “Pupu A’o Ewa” a traditional Hawaiian song adapted as “Shells of Ewa”/”Pearly Shells” (sometimes mistakenly mentioned as “Tiny Bubbles”, Don Ho’s signature hit from three years later). Relaxing eye-candy locations on Kauai include Hanamaulu Bay and Waimea Canyon.  Ford brought the vacation in for $3,585,000. Domestic grosses came to $8,900,000, ranking a relaxed 33rd for the year.

* Go Ahead and Gag If You Can’t Take the Joke Dept.—‘Reef‘ recalls a trio of dear friends, all now sadly departed, much too soon. My great pal Jay Amicarella and I made the 3-sheets-to-the-wind whoops! of inflicting this on his erudite girlfriend Kath, who let us know she thought it was about as funny as a liver operation, coolly eyeing us like we’d escaped from medieval Scotland. Kath was a lovely lady, smart as a whip and quick with a quip, but this boys night out left her beached. Contrarily, when on another occasion I took the chance to foist its silliness on my lady love of the time, Sandra Walker, she chuckled at all the right parts. Sandra was, if anything, even better read, more naturally sensitive and a greater check-it-off liberal than Kath, but she possessed that oddly elusive, magical ingredient—now increasingly rare—of being able to roll with a joke. She got it. Without, lo and behold, sacrificing her values. Makes all the diff. My three beloved friends are all gone now, as is almost everyone who had anything to do with this movie. So, it seems, is a grip on common sense and the bonding therapy of shared self-kidding, missing in action from way too much of the populace. Too bad, since a proportionate sense of humor will come in handy in the time we have left.  “Not the BRANDY, you dope!”

Wayne: “He never should have used me on that picture. He should’ve picked some young guy. It didn’t require much of him. All he had to be was a good-looking guy, and I wasn’t young enough.”  Hell, Duke, maybe, but then how much fun would it have been? The breezy farce joined Wayne’s other broadly played, more successful comedy that year, McLintock!, a donnybrook in more familiar duds.

Martin Scorsese: “That film has got some sloppy things in it, and some silly things but it’s enjoyable—and it really is Ford.”

The script, such as it is, is frequently reported as having been inspired by “The South Seas Story”, a short piece from James A. Michener. Darned if I can find this anywhere (the Internet going down with the quip), as it was not part of the author’s short story collections “Tales Of The South Pacific”, “Return To Paradise” or “Rascals In Paradise”.

Elizabeth Allen, 33 at the time, had been featured in supporting roles in a few A-list films (From The Terrace, Diamond Head), as well as on TV, including “The After Hours”, the first episode of The Twilight Zone. The Relegated Ancients among us may smile into our jello cup knowing that she had been the “Away We Go!” girl on The Jackie Gleason Show. Ford admired her spunk along with her look (in the cool-as-hot vein of Gene Tierney) and next gave her a supporting part in Cheyenne Autumn.  While her film career sail, much TV work ensued.

Of the kids—Jacqueline Malouf (21 at the time, playing 16 in the film), left acting to become a teacher and artist. She passed away in 1999, at 58, from leukemia. Cherylene Lee, then 9, had been performing on TV since she was four. She got a Masters in Geology, became a playwright and author. Her autobio ,”Just Like Really: An Uncommon Chinese American Memoir”, was published in 2015, a year before she succumbed from cancer at 62. Tim Stafford, who was 7, was Ford’s godson. He later changed his name to Jeffrey Byron, continued to act, and became a writer and photographer. 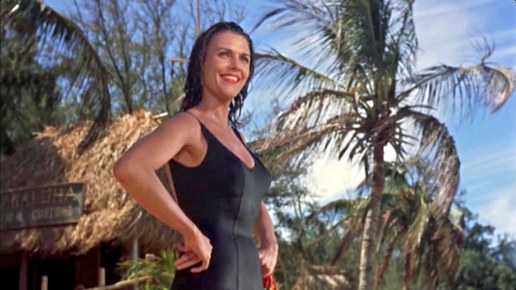