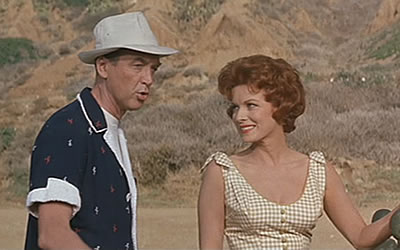 MR.HOBBS TAKES A VACATION was a sizable hit in the summer of 1962, something the whole family could enjoy on a night out at the drive-in. “Wholesome family comedy from the 60s” provokes sour faces from self-flattering cynics, but in this case their perpetual grump meter needs a reset: thanks to a great cast and funny, relatable situations for them to play with, this durable fave scores one for nostalgia.

Middle-class Midwest banker ‘Roger Hobbs’ (James Stewart) hoped to have a romantic getaway with wife ‘Peggy’ (Maureen O’Hara) but it becomes a month-long string of challenges when the entire family joins them at a rented beach house in California. The Victorian construction has its own issues (“If this house was good enough for Edgar Allan Poe, it’s good enough for us“) but Roger must contend with his two grown daughters (one with a ratty little tyke, who hates “Boompa“), both unhappy with their problematic husbands, plus the two younger Hobbsians, a teenage girl stuck with braces and a pre-teen boy glued to the TV. Rog is a never-say-die kinda fellow, but the family fort soon begins to feel like the Alamo. 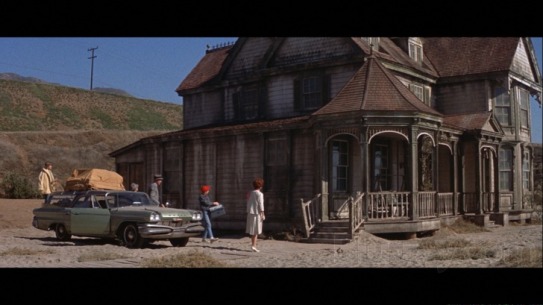 Adapted from Edward Streeter’s 1954 novel “Mr. Hobbs’ Vacation” (he also wrote “Father Of The Bride”), the laugh-laced screenplay by veteran Nunnally Johnson was directed by Henry Koster, who’d steered comedy hits like The Bishop’s Wife and Harvey, one of star Stewart’s best-received postwar pictures. The episodic storyline has plenty of smiles, chuckles and laughs, but also is sharp enough to include some effective jabs of family discord and worry, both tart and touching, just enough to keep the farcical elements tethered to an undercurrent of reality. 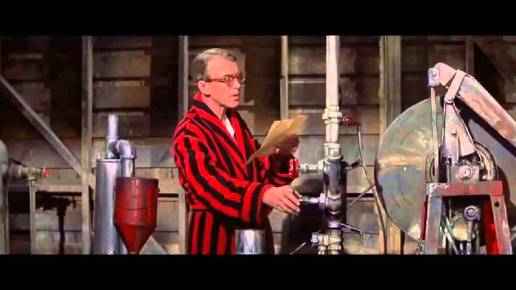 Stewart’s deft and winning comedy skills get airing, and the teaming with O’Hara (looking lovely, and pretty darn sexy for a movie mom of the day) works like a charm. The script credits the parents with maturity too often absent in family-set imbroglios.  Among those on the scene are local nice guy ‘Joe’ (Fabian, 18, added to help bring in the she-teens), pretentious “intellectual” son-in-law ‘Byron’ (John Saxon) and Hungarian beach bomb ‘Marika’ (Valerie Varda), who momentarily blurs then restores Mr.Hobbs 3-D vision.  Most hilarious is a visit from the eccentric ‘Turners’, ‘Martin’ (John McGiver) and ‘Emily’ (Marie Wilson)—their comic timing playing off Stewart’s is pure delight. “Barnswallow! ” 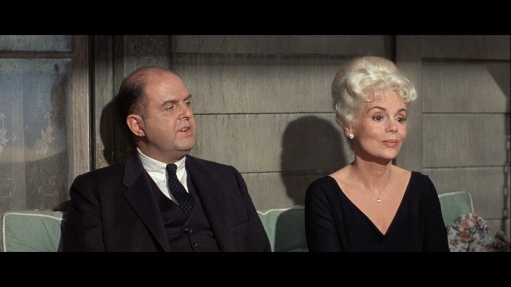 L.A. area seaside locations include Laguna Beach, Newport Beach and Malibu’s Leo Carrillo State Beach. Jaunty music score is from Henry Mancini: it does include the films low point, the not-destined-for-charting Johnny Mercer ditty “Cream Puff”, foisted on Fabian. Made for $2,000,000, the picture’s $11,400,000 gross put it 18th place for the year; it also did well abroad.

* Laurie Peters, 18, married another young actor in 1962, Jon Voight: they stayed together until ’67. They first met doing “The Sound Of Music” on Broadway: she was ‘Liesl’, he played a Nazi, go figure. Following Hobbs she featured in another vacation romp, with Brit sensation Cliff Richard: 1963s Summer Holiday was a big hit in England. She became an acting coach and author.  Michael Burns, 14, was all over TV in the 60s: he later went on to earn a P.H.D. from Yale, becoming a writer and history professor. Natalie Trundy would later do volunteer work in Calcutta with Mother Teresa.

Nunnally Johnson (whose many weighty credits ranged from The Grapes Of Wrath to The Dirty Dozen) scripted two more family-friendly comedies for Stewart that also were directed by Koster; Take Her, She’s Mine and Dear Brigitte (with Fabian again) are featherweight amusements that neither fared as well nor hold up as happily as Mr.Hobbs Takes A Vacation. 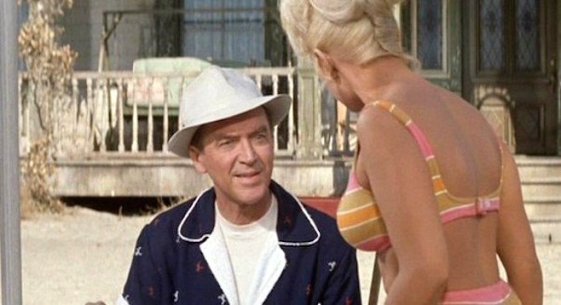