DICK TRACY, the straight-arrow, straight-shooting police detective, began life as a comic strip in 1931, when creator Chester Gould based him on real-life crook-chaser Eliot Ness. Generations followed Tracy exploits via newspapers, radio, comic books and on screen in serials and several B-pictures of the late 40s. The big-budget version that steamrolled into theaters in 1990 had been pitched back & forth between studios, stars, writers and directors since the mid-70s.  Ultimately, Warren Beatty took fedora and tommy-gun in hand to direct, produce and star, with a cast packed to insure that pals, former co-stars and his then-current girl-toy could play it big and maybe recreate some bygone gee-whizzing.

1938, some kinda metropolis. Gangsters like ‘Big Boy Caprice’ (Al Pacino) have enough yucky henchmen to strong-arm small-fry folks, but the hoods meet their match in determined copper Tracy (Beatty). Truth, Justice and the American Way require occasional injections of the knuckle sandwich and .45 caliber persuasion prods. While Tracy battles it out with Caprice and his lineup of thugs, Dick is also tested to choose between loyal girlfriend ‘Tess Trueheart’ (Glenne Headly) and nightclub vamp ‘Breathless Mahoney’ (Madonna).

Written by Jim Cash and Jack Epps,Jr., then rewritten (minus credit) by Beatty and Bo Goldman. The results are akin to going to a trendy restaurant that everyone’s talking about, being impressed by the mood lighting and fancy decor, assured by the attractive server that the expensive, exotic-sounding dish you ordered will rock your world. Then the food is just….okay. That stuff on the wall is cool, though. 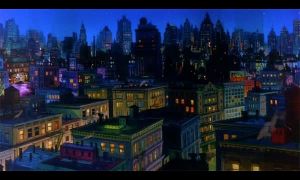 Beatty put it this way: ”Emotionally, I began to get interested in that childlike feeling about the thrill of bright, primary colors, the sight of the stars and the moon, and people with primary emotions. I could look at them the way I looked at them when I was a kid — a bad guy was bad, a good guy was good, things were simpler and straightforward….I thought if I could make Dick Tracy the centerpiece of a swirl of color and plot, then maybe I could keep him from being terminally dull, which a straightforward character like that is in danger of being.”

Apart from Glenne Headly’s quietly charming turn as Tess, the human element and do-we-care?-factor is barely present. After bombing out—as in nuked—with Shanghai Surprise, Who’s That Girl and Bloodhounds Of Broadway, Madonna still doesn’t sell as an actress here: whatever heat she generated with Warren offscreen doesn’t sizzle on camera. For someone all about SEX, she’s oddly unsexy, even when unloading enough cleavage to hew a Hefner. Is this the movie where Al Pacino started his yelling thing? Like Jack Lemmon’s ‘Professor Fate’ back in The Great Race, it’s funny for a while, then it begins to make your teeth hurt: Caprice borders on repulsive.

When the Oscars rolled around, seven nominations went up. It won, justifiably, for Art Direction and Makeup, less so for Song (“I Always Get My Man”), missing with other statue nods for Supporting Actor (Pacino), Cinematography, Costume Design and Sound. As late as 2016, Beatty mentioned the idea of a sequel.

* Oscar tussle——-Pacino’s unrestrained yowling lost to another gangster with anger issues–Joe Pesci in Goodfellas. Madonna’s adequate crooning of Stephen Sondheim’s “I Always Get My Man” pales before Meryl Streep’s belting “I’m Checkin’ Out” in Postcards From The Edge. 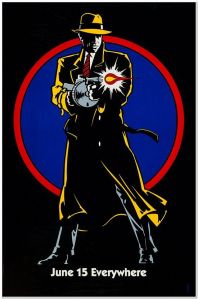 One thought on “Dick Tracy”