THE PLAYER, director Robert Altman’s 1992 satire on Hollywood, drew lavish praise from critics and pulled down Oscar nominations for Director, Screenplay and Film Editing. Reviewer raves are one thing, but it’s nice when paying moviegoers line up. It grossed $21,700,000 domestically, 57th among the year’s crop, with another $7,171,000 taken abroad. Against a budget of $8,000,000, the box-office made for what mounted to a comeback, as the contrarian Altman hadn’t had a popular success for 12 years (Popeye in 1980). Then, following The Player’s success six more pictures bombed. It was nine years before the public showed up in numbers, for one of his best films, Gosford Park, in 2001.

“I was just thinking what an interesting concept it is to eliminate the writer from the artistic process. If we could just get rid of these actors and directors, maybe we’ve got something here.”

Taken from his novel, the trenchant, from-the-trenches screenplay by Michael Tolkin and the director’s smooth handling was/is usually described as scathing, but Altman called it a “very, very soft indictment of Hollywood, an unrealistic look at that arena. Hollywood is much crueler and uglier and more calculating than you see in the film.” Ouch. 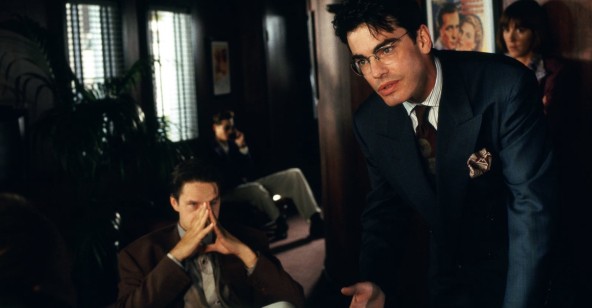 Blithely arrogant studio exec ‘Griffin Mill’ (Tim Robbins), besides dutifully making endless rounds of brunch, lunch and poolside party meetups, has, with help from story editor and current girlfriend ‘Bonnie Sherow’ (Cynthia Stevenson, screen debut), the task of green-lighting maybe a dozen pitch submissions a year. Out of 50,000. Feelings will be hurt. Bad enough that someone is sending him death threats. The eerily placed messages, combined with justified worry that slick shark ‘Larry Levy’ (Peter Gallegher) is gunning for his job, pushes Griffin’s concern into paranoia, lethal action, and a sudden romance. Will Hollywood produce a happy ending?

Initially, it seems like it may just be a smug case of indulgence, but the storyline takes hold, the script is smart and funny, the details are keen, the actors engaging. A running gag in-joke that encapsulates fru fru pretense has Robbins, over the course of the plot, ordering seven different bottled waters, once casually scolding a waiter for serving water in a wine glass.

Critics gaga’d over the opener, a 7 minute/47 seconds shot without an edit (it took 15 takes) and a sex scene between Robbins & Scacchi, done from the neck up. Altman got credit for that, but it came because Scacchi, sick of having her body paraded by director after director, adamantly resisted his less-than-gallant insistence on nudity. *

Thomas Newman’s score bubbles up a sleek aroma of tension, Jean Lépine’s cinematography bathes it all in the right buttery upscale L.A. tones.

* Scacchi let him know “I cannot once again play the part of the blonde sex bomb who’s going to take her clothes off.” He agreed, then shooting day arrived: his charmless directive was “You get your ass on that set, take your knickers off and do what you’re paid to do.” Scacchi: “We shot the last scene in an atmosphere of absolute tension. We did one take of me and Tim Robbins, just from our necks up, doing a sex scene – which Altman was then lauded for.”

Furthering her annoyance, he worked publicity by announcing that Scacchi would, for once, keep her clothes on and that it was all his idea. When she called him, complaining he was stoking old prejudices about her, he laughed at her. “He is not the sort of person who remembers those things. He is an artist.” So much for mocking the business, Bob. To requote him from above: “Hollywood is much crueler and uglier and more calculating than you see in the film.”