Prosecutor ‘Rusty Sabich’ (Harrison Ford) is assigned to investigate the rape-murder of colleague ‘Carolyn Pohemus’ (Gretta Scacchi). Running for reelection, his D.A. boss (Brian Dennehy) pressures Sabich even though Rusty has a highly personal conflict of interest since he’d had an affair with the deceased. His marriage (Bonnie Bedelia plays his wife) has barely recovered, but in short order that becomes just one of his worries: he gets accused of the murder. Rusty engages high-profile defense attorney ‘Sandy Stern’ (Raul Julia), but the case against him is formidable. Do you really think the system works? Fairly?

High-powered cast plays like a dream with the smart script and taut pacing. Ford ably joins the Michael Douglas Club of Compromised Husbands, Scacchi is scorching—and scorched earth—Dennehy primed to blow, Julia the picture of debonair capability. Bedelia, 41, has probably the best role of her feature career. All secondary characters are well-delineated. It’s the best legal drama of its decade. **

* Pakula: “I am oblique, I think that has to do with my own nature. I like trying to do things which work on many levels, because I think it is terribly important to give an audience a lot of things they might not get as well as those they will, so that finally the film does take on a texture and is not just simplistic communication.”

** Worthy opponents in the 90s—-A Civil Action, A Few Good Men, The Firm, The Gingerbread Man, The Insider, The People Vs. Larry Flynt, Primal Fear, The Rainmaker, A Time To Kill. 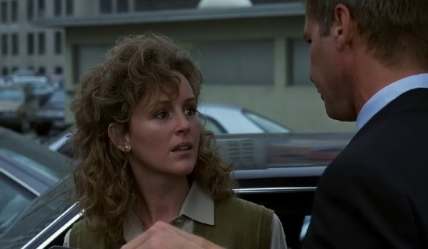