1918, the Western Front. Before the Yanks arrive to relieve the exhausted French and British, the German army hopes one final push will end the futile stalemate. Part of that  involves their gallant, steadily dwindling air corps. Most of the fliers come from aristocratic backgrounds and cling to chivalry. Former infantryman ‘Bruno Stachel’ (George Peppard), not of their class, has a more brutally practical approach, and is ego driven to best his ‘betters’ and win the country’s highest decoration. A general (James Mason) coolly calculates the propaganda value of the win-at-all-costs Stachel is worth being a cuckold when the cocky airman finds his way into the bed of the general’s young, beautiful and voracious wife (Ursula Andress), a hero-collecting countess.

“Stachel…there is something of the cobra in you. I’ll have to watch you.”

Filmed in Ireland, the $5,000,000 that director John Guillerman was given to play with looks like a lot more (it would be astronomical today), what with recreated French villages and battlefields, a mass of extras, props and costumes and a small air force. No vintage planes from The Great War were available, so some were built from scratch, others were disguised and mocked-up enough to pass audience review: aircraft connoisseurs or strict accuracy dweebs would naturally feel the need to squeak (anything to stifle enjoyment). The author of the book voiced complaint over many changes to his novel (typical), but it’s a good screenplay on its own terms. Lengthy at 156 minutes, interest between the numerous exciting action sequences doesn’t flag thanks to tart dialogue and solid acting. **

Peppard, at 37, was hot from huge hits Breakfast at Tiffany’s, How The West Was Won and The Carpetbaggers; he sported tailor-made hero looks and carried off the right confident/arrogant attitude for the part, though as the name itself would indicate Bruno Stachel is not a warm and likable fellow. Mason’s innately assured as the high-born, power-wielding general and there are telling performances from Jeremy Kemp as the class-polished top ace Stachel wants to beat (in the air with the British and in bed with the Countess), and Karl Michael Vogler as the resolute, fair-minded squadron commander. Underlying the combat drama and sex games is class warfare—commoner, underdog whelp Stachel vs. all the rest; bred to rule, but hobbled by their outdated notions of gentlemanly conduct in the midst of a mechanized slaughterhouse. Stachel’s bold, avaricious challenge isn’t just an affront; he’s announcing a colder future. 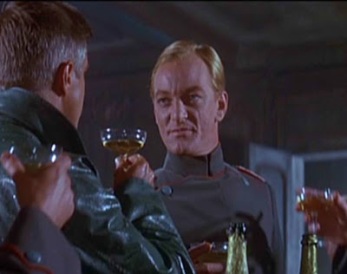 Because of her accent, Ursula Andress was dubbed (by Nikki Van der Zyl, who’d voiced her in Dr.No), but she displays more emotion here than in any other film she made, and, 29, looks to kill: she has some steamy love scenes with Peppard, quite racy for the time, still retaining heat today. Initially, her character is a walking Venus Fly Trap, but there’s more under the surface. If you can tear your eyes off the surface…

The dogfights and other scenes aloft, top of the line for the era, are still very impressive (you have to excuse too much smoke coming from the planes–done for cinematic effect)—no CGI, kids— and the thunderous, big-scale ground-level battle sequences are superbly orchestrated. Jerry Goldsmith provides another superior music score, with a soaring main theme that wraps up the exultation of flight, the sense of a time gone by and the deadly seriousness of the whole man’s duty & folly business.

On the ground, Douglas Slocombe was the cameraman tasked with recording the trenches, chateaus and boudoirs, their carnage, clashes and coupling. Aloft, the aerial daring was shot by veteran 2nd-unit man Skeets Kelly, who had many high-profile credits in various lensing capacities. He was later killed filming Zeppelin. Fit support in the cast from Harry Towb, Anton Diffring, Derren Nesbitt, Carl Schell, Friedrich von Ledebur and Loni von Friedl.

* The eye-popping epics of ’66, in order of money-making hit-ittude—Hawaii, The Bible, The Sand Pebbles, Grand Prix, The Blue Max, Khartoum and Is Paris Burning?

Jerry Goldsmith in 1966—superb scores for The Sand Pebbles (Oscar-nominated), Our Man Flint and Seconds, as well as OK work on Stagecoach and The Trouble With Angels.

Producer Elmo Williams, on director Guillermin: “indifferent to people getting hurt as long as he got realistic action…a hard-working, overly critical man whom the crew disliked.”