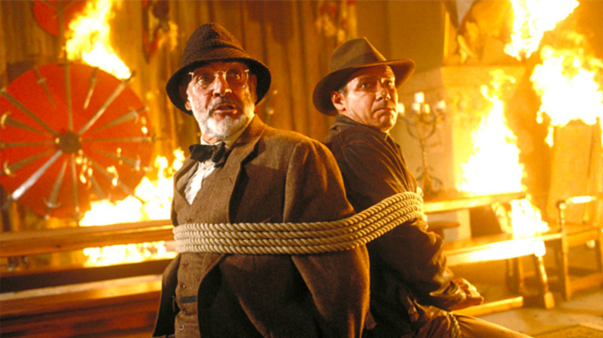 INDIANA JONES AND THE LAST CRUSADE cancelled out the bad taste left by the second Jones escapade from five years back, with an exuberant conclusion (we thought) to Indy exploits in this light-hearted 1989 smash. A $55,400,000 Spielbergian playbox arsenal made $197,200,000 in the States (#2 after Batman), and the total of $474,172,000 worldwide put it #1, in a year overloaded with less exalted—let alone wanted—sequels. * 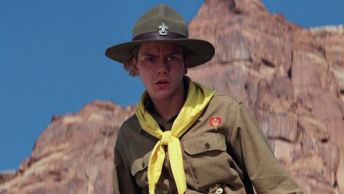 After a jump-start 1912 prologue, with young Indiana Jones displaying adventure mettle as a Boy Scout (River Phoenix), the story moves to 1938, where now-Professor Jones (Harrison Ford) takes on the task of tracking down his father, gone missing while seeking The Holy Grail. The trouble is that agents of the Third Reich are after the relic as well, and the rip-roaring pursuit goes from Venice to Austria, into Nazi Germany and finally the ‘Republic of Hatay’. 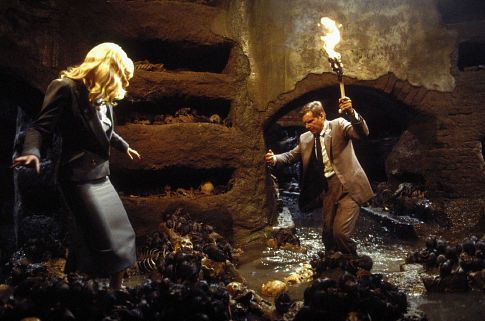 As with many such high-end concept pictures, development went through years of rewrites by various individuals, with the final script done by Jeffrey Boam, while Tom Stoppard did unaccredited polishing. Boam cracked that “the battlefield was littered with writers before I came on to the scene. There were four or five before me. Each writer had their script next to them covered with blood.”  Hos recipe: “Plot tries to engage intellectually, but that’s not how an audience responds. I want emotional reaction, not intellectual engagement. An audience wants to be wound up because it enjoys the pop at the end when it’s liberated.”  It’s a clever script.

Tone and casting are key in #3, along with the expected exciting action sequences, the complex, stunt-packed mini-masterpieces that Spielberg does brilliantly. Though there are plenty of bad guys biting the dust by various vicarious violent virtuosities, with blithe indifference shown by our reluctant hero—maybe the most lethal scholar since Julius Caesar—the meanness from the previous film is absent, and thankfully the pacing and noise level is not shattering & deafening (no Kate Capshaw breaking your eardrums). The thrills come via train & ship, motorboat & motorcycle, zeppelin & airplane, horseback & tank. In catacomb, canal and desert, with snakes, rats and a rhino. Don’t lose that fedora during a fistfight next to a propeller, your cool in a liplock from a blonde secret weapon named ‘Elsa’, or bat an eye when Hitler gives you his autograph. 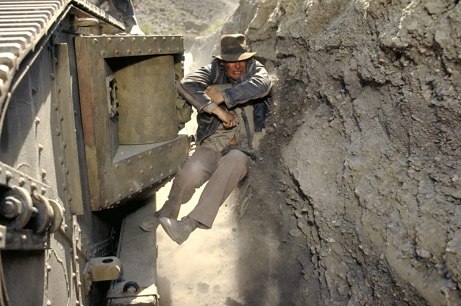 Casting secures this a winner, thanks to Spielberg’s coup of having Sean Connery come aboard as the senior Jones. Clearly having a good time, the guy who pretty much re-invented action-adventure heroics has great rapport with Ford (actually only 12 years younger than Sean): their scenes together are delightfully put over; zest and charm, spatting that doesn’t get sappy. Two more aced casting calls add extra wit and spice. One was having the superb scene-stealer Denholm Elliott return from the first go-round to buffer the outnumbered good guy contingent. And on the enemy end of the equation, a striking young Irish model, Alison Doody, donned femme fatale garb as an Austrian professor in league with the planet-thirsting Nazis and their wealthy American backer seeking eternal life. Wouldn’t you rinse a 2,000-year-old cup before taking a swig from it?

With the invaluable Douglas Slocombe on camera, filming was done in Spain (the Tabernas Desert in Almeria), Italy (Venice), Jordan (Petra), Germany (Bürresheim Castle), England (interiors) and the United States (Colorado, Utah, California). The daring doings won a deserved Oscar for Sound Effects Editing, with nominations going to the Music Score (John Williams, who else?) and Sound. 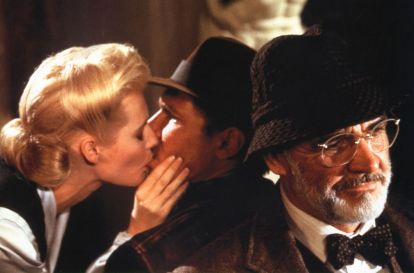 128 rollicking minutes that left audiences happy they paid, with Julian Glover, John Rhys-Davies (back from ‘Raiders‘), Michael Byrne (the cur who tried to rape ‘Murron’ in Braveheart), Robert Eddison, Kevork Malikyan (the fierce prosecutor in Midnight Express). Michael Sheard impersonates Hitler, one of five times the Scottish actor played Adolf.  “It tells me that goose-stepping morons like yourself should try reading books instead of burning them!” 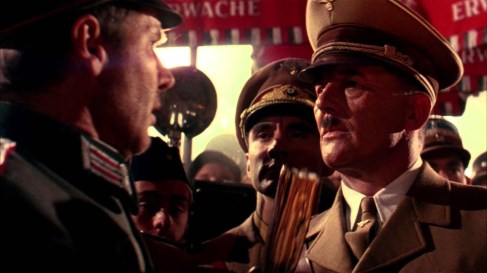 Note that the 18-year-old Phoenix had served splendidly Ford’s son three years earlier in the absurdly underrated The Mosquito Coast.

Yes, those are mostly real rats—2,000 were bred, disease-free, for the filming. 1,000 mechanical or otherwise mocked-up rodents were also in play. Speaking of vermin, if it’s not enough that the quest in general and the quaking, unleash-good-curse-power finale in particular tread on religious fantasy, how about the heretical idea that a rich American industrialist would ever consider of stooping to work with Nazis—for shame!

* None of the other sequels that year held much—in most cases, any—charm. It may hurt you to read the list: Back To The Future II, Lethal Weapon 2, Ghostbusters II, Star Trek V:The Final Frontier, The Karate Kid Part III, A Nightmare On Elm Street 5, The Fly II, Friday The 13 Part VIII, Police Academy 6, Halloween 5, The Gods Must Be Crazy II, Fright Night II, Stepfather 2, American Ninja 3, The Toxic Avenger Part II, The Toxic Avenger Part III, Return Of The Swamp Thing.  Were you waiting to see if we’d actually add Henry V ? 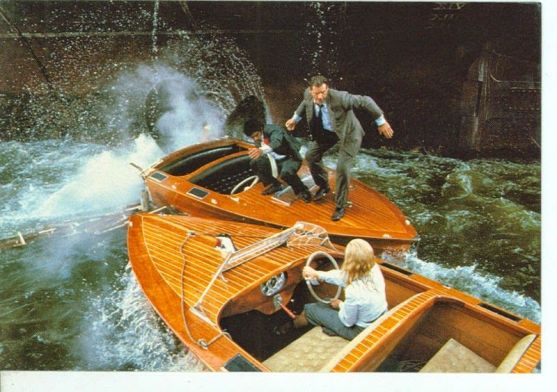 2 thoughts on “Indiana Jones and The Last Crusade”