HELL IS FOR HEROES, a grim and tough WW2 story from 1962, looks and plays like a larger version of the classic TV show Combat!, which started its 5-year run in the fall of that year. That’s because they were both conceived by war vet Robert Pirosh, who shares screenplay credit on the film with Richard Carr. The tense score was composed by Leonard Rosenman, who did the music for the series. Very well directed by Don Siegel, sporting an excellent cast, clean black & white cinematography, and exciting action scenes, it holds up as one of the better war pictures of the decade. *

1944: American troops are about to assault Germany’s heavily fortified ‘Siegfried Line’. On one lightly-manned part of the front is a battle-weary squad that includes a surly replacement named ‘Reese’ (Steve McQueen); wound a mite too tight when it comes to getting along with the others, he does show a definite dark talent for the daunting job at hand.

Filming was done north of Redding, California. Well-reviewed, but its boxoffice gross of $3,700,000 only put it 64th in ’62. In bits: Michele Montau, Bill Mulliken, L.Q. Jones and Don Haggerty. 90 minutes.

* Writer Robert Pirosh had personal experience from the Battle of the Bulge, earning a Bronze Star for his actions at Bastogne. He won an Oscar for writing Battleground, the hit 1949 movie about that fight, and pulled a Best Story nomination two years later on Go For Broke!, another popular WW2 film, that one about the highly-decorated Japanese-American 442nd Regimental Combat Team.

This was the 2nd of five roles in a row where ex-Marine McQueen suited up in uniform. Preceded by the weak peacetime-service comedy The Honeymoon Machine (sailor), followed by the glum WW2 outing The War Lover (psycho airman), the classic The Great Escape (good-crazy WW2 airman) and another lukewarm peacetime-service comedy-drama, Soldier In The Rain (army). Apparently he wasn’t a lot of fun on the set of Hell Is For Heroes (and numerous others), which gave rise to a maybe-true? anecdote that we’ll repeat just because—real or not—it’s funny. Supposedly, visiting columnist James Bacon mentioned that McQueen seemed to be “his own worst enemy”, to which Bobby Darin piped up with “Not while I’m around.” 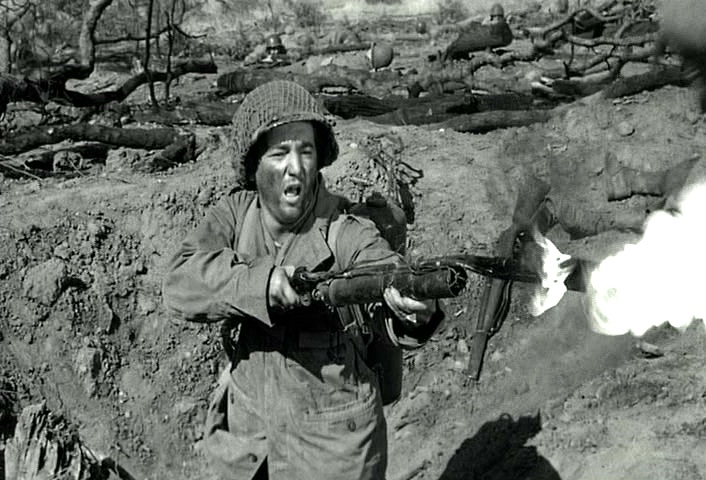 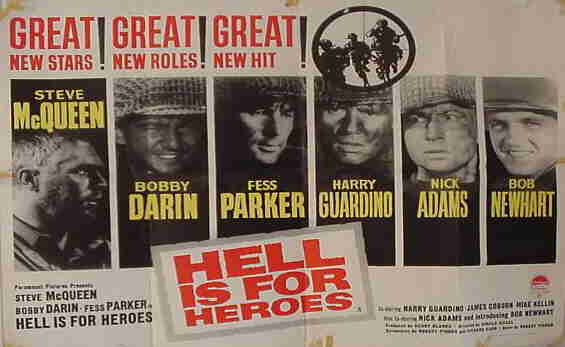