ELIZABETH anointed new screen royalty in 1998 with the dramatic ascension of a 28 year-old Australian chameleon named Cate Blanchett into the pantheon of the greats. Surrounded by period finery, tumult and pomp, she dominates an expensive, intricate and intimate historical epic with a multi-dimensional performance of direct, vibrant immediacy and honesty. Her first Oscar nomination resulted, one of seven garnered by the movie.

England, 1558. When Queen Mary I dies, her 25-year-old half-sister Elizabeth (Blanchett) assumes the throne. Beset by a Protestant v. Catholic religious schism, her country is broke, weak militarily, beset by more powerful France and Spain. Not enough, her court is shot-through with parties conspiring against each other as they seek to sway, seduce, bully, compromise or just simply do away with the inexperienced new queen. She’s also single, with competing suitors who have motives beyond just making her happy and/or producing an heir. Boiled down it’s Sex, War, Passion, Politics and Lies vs. Character.

Directed with panache by Shekhar Kapur, as written by Michael Hirst, it’s stellar drama, but look to books for historical accuracy, as bathwater and baby once again get thrown out to suit putting across essential emotional truth rather than factual fidelity. 98% of those who watch won’t know, care or bother to find out. Spoilsports flail, but, as history itself shows, art & stagecraft often triumph over reality. A good bluff helps.

“He shall be kept alive to always remind me of how close I came to danger.”

“I may be a woman, Sir William, but if I choose I have the heart of a man! I am my father’s daughter. I am not afraid of anything. ”

All bow to Queen Cate—coy and playful, nuanced and naked, confused and crushed; fierce, defiant and radiant. A mighty monarch lives, a star was born.

The richly bedecked production ran up a tab of $30,000,000, then matched that figure by coming in 63rd place in the States, part of a global gross that totaled $82,100,000. When the Academy Awards rolled around, the film took a statue for Makeup. Along with Blanchett’s Best Actress nomination (Gwyneth Paltrow snagging it for Shakespeare in Love), it went up for Best Picture, Cinematography, Art Direction, Music Score and Costume Design. 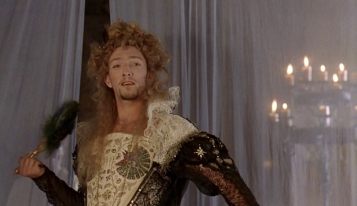 * Blanchett had only appeared in six films, little seen. She had drawn notice in ’97 for co-starring with another Fiennes, brother Ralph, in Oscar and Lucinda and for a vivid supporting role in Paradise Road, but they didn’t stir any box office attention. Her first stage role, in 1992, in a David Mamet play called Oleanna, was opposite Geoffrey Rush, who also worked with Joseph Fiennes in Shakespeare in Love, and pulled an Oscar nomination down for that one. 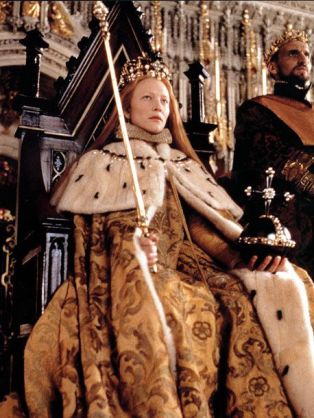 One thought on “Elizabeth”