JEAN de FLORETTE and its 2nd Partie MANON OF THE SPRING were filmed consecutively from May to December in 1985, then released in France three months apart the following year. The 1986 pair, running seven minutes shy of four hours, made it to the U.S. in late ’87, where, as in the rest of the world, they received critical praise and box office success. Marcel Pagnon wrote & directed Manon des Sources in 1952, but the long (220 minute) film was not successful. He then put the work into the form of a novel “L’eau des collines”/”The Water Of The Hills” done in two parts, published in 1963. Directed by Claude Berri, the 1986 versions were adapted from the novels by Berri and Gérard Brach.

“Remember, it’s much easier to push something downhill than uphill, so push him in the direction where he’ll fall.”

Set in a small rural community in Provence, France, Jean de Florette begins in the 1920s; Manon Of The Spring concludes there a dozen-odd years later in the 30s. Calculating old bachelor ‘César Soubeyran’ (Yves Montand, 64) and his dense nephew ‘Ugolin’ (Daniel Auteuil) are the last of their once-influential clan. Ugolin’s scheme to grow flowers requires water, but the source is a stream on neighboring property. When that land is inherited by ‘Jean Cadoret’ (Gérard Depardieu), the Soubeyran’s wage a stealthy campaign to foil the newcomer (a city outsider, tax collector and hunchback—the villagers backwardness and pettiness includes superstitions), a decent man who is overjoyed to make a go of the land with his loving wife ‘Aimee’ (Depardieu’s wife Elisabeth) and young daughter ‘Manon’ (Ernestine Mazurowna). In the succeeding Manon Of The Spring, devious plotting and tragedy have benefited the wily uncle and his dolt nephew, but ‘Manon’, now an elusive, captivating young woman (Emmanuelle Béart, 21) finds a way to make them regret their treachery.

The sense of time and place is all-enveloping, script is superb, the acting sublime, Montand in particular is outstanding. Beart is absurdly beautiful. The first part is maybe just a hair better, but all round, the matched pair are a wonderful achievement.

The lengthy shoot and production detailing with all the period recreations pushed the cost to $17,000,000, at the time the most ever lavished on a French film. Hugely successful elsewhere, upon 1987 release in the States Jean de Florette grossed $4,941,000; following a few months later, Manon Of The Spring took in $3,940,542. No Oscar recognition was given. Other notable foreign films vying for attention at the time included Babette’s Feast, Pelle The Conqueror, Au Revoir Les Enfants and Wings Of Desire. 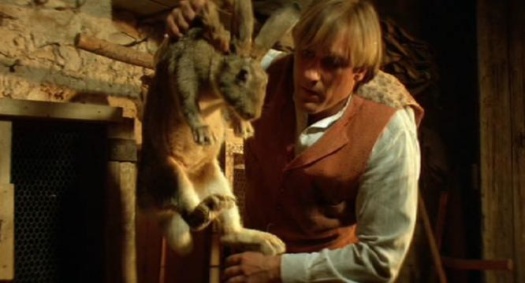 With Hippolyte Girardot, Margarita Lozano, Armand Meffre, Roger Souza, Yvonne Gamy. In a twist of fate, ‘Manon’ and ‘Ugolin’ actually got together in real life, at least for a while: Emmanuelle Beart and Daniel Auteuil were married from 1993 to 1995.