THE PRESIDENT’S ANALYST  has a loyal following of fans who saw it back in goodie-packed 1967, gratified that’s its cult rep turned into deserved status as something of a treasure. The Graduate was the year’s biggest comedy hit, getting most of the notice; while this garnered good reviews, it was only a moderate moneymaker, the $6,100,000 take enough to handle costs (a little over $2,000,000), but still only posting it 44th among the year’s entries. James Coburn, a favorite from six years of catchy supporting work, had finally hit stardom in ’66 as Our Man Flint, and while that cool, fun spy-spoof gave him his most famous role, he’s even better in this black comedy, a merrily subversive send-up of the States splintering scene. Fittingly, it begins with an opening disclaimer that lets us know that the F.B.I. and C.I.A. did not cooperate with the filming.

“If I was a psychiatrist, which I am, I would say that I was turning into some sort of paranoid personality, which I am!”

Successful Manhattan psychiatrist ‘Dr. Sidney Schaefer’ (Coburn) is ‘asked’ to serve as shrink to the President Of The United States. At first he’s honored, and quickly amazed by his patient’s solitary-borne burdens and need for relief. Then, he’s frazzled by continual on-call summons. Finally, paranoia and panic arrive when he finds his love-dove girlfriend (Joan Delaney) works for the Feds, and when he ducks out he’s pursued by domestic (the ‘F.B.R.” and ‘C.E.A.’) and foreign intelligence agencies, chiefly represented by the dry humor likes of racial-ice-breaking comedian Godfrey Cambridge and improv expert Severn Darden. On the run he encounters a “liberal” suburban family, the ‘Quantrill’s’ (led by pistol-packing dad William Daniels) who are overjoyed to encounter “Muggers!” , and a caravan of hippie musicians into LSD (who knew?), led by the sexy ‘Snow White’ (Jill Banner) and spacey ‘Old Wrangler’ (Barry McGuire of “Eve Of Destruction” fame). But—who’s really behind it all?

Written & directed by influential satirist Theodore J. Flicker it’s devilishly funny all along, often in laugh-out-loud style, delightfully pot-shotting at a number of juicy targets, and notable for taking an early—and under the joke, eerie—look at modern ethics and privacy, and their corruption and intrusion by telecom giants, working with/for the government. Furthermore, it manages to do all this without coming off mean. Coburn, who helped get the film green-lit, gives a standout performance, with skillful physical humor every bit as good as Peter Sellers. Lalo Schifrin’s mischievous score includes a cute poke at the then-current national infatuation with The Tijuana Brass. William A. Fraker did the suitably off-kilter cinematography.

BING QUANTRILL: “Hey, Dad. You want the Magnum .357 in the house?”   WYNN QUANTRILL: “Darn it, Bing. I told you not to play around with my guns. No, I do not want that in the house. That is my car gun. My house gun is already in the house. Now, put that back in the glove compartment, and don’t let me catch you fooling with my guns again.”  BING: “I’m sorry, Dad.”  WYNN: “Great kid.”

With Eduard Franz, Walter Burke, Pat Harrington Jr., Will Geer, Joan Darling, Arte Johnson, Hank Worden (as a dirty old man in the acid sequence!) and Sheldon Collins. The ship used in one sequence was the Wild Goose, a retired minesweeper famous as John Wayne’s yacht. Holy Alamo, did the Duke read the script? 103 minutes.

* Inferior spy-related spoofs that year included Casino Royale, The Ambushers, Caprice and Coburn’s own lame sequel, In Like Flint, which nonetheless did better business than his ‘Analyst’. The year’s ‘serious’ espionage thrillers sucked as well—The Double Man, Deadlier Than The Male, The Cape Town Affair, The Naked Runner. Even Bond slipped, as while You Only Live Twice was spectacular, entertaining and a hit, it was also a decided comedown from the previous 007 winners. For wit, The President’s Analyst leaves them all whining on the couch.  One person definitely not amused was FBI tyrant J.Edgar Hoover, and “forces” went to work that basically sidelined the career of the writer-director. Sadly unknown today to most Americans, Theodore Flicker, 1930-2014, was a truly vital social/political satirist, instrumental in furthering many more famous comic careers: that’s a homework cue, people.

** Pop 60s fashion model Joan Delaney made her movie debut as Coburn’s lissome girlfriend. She only did a few more inconsequential parts over the next several years. Can’t find any followup information. Likewise appealing, Jill Banner, later a girlfriend of Marlon Brando’s, was ill-fated, killed at 35 in a 1982 car crash. Groundbreaking comedian Godfrey Cambridge died of a heart attack in 1976, just 43.  They all shine in The President’s Analyst, which joins other subversive black comedies of the 60s that still hold up, wild & crazy items such as The Balcony, Lord Love A Duck, The Loved One and Pretty Poison.

“Take that, you hostile son of a bitch!” 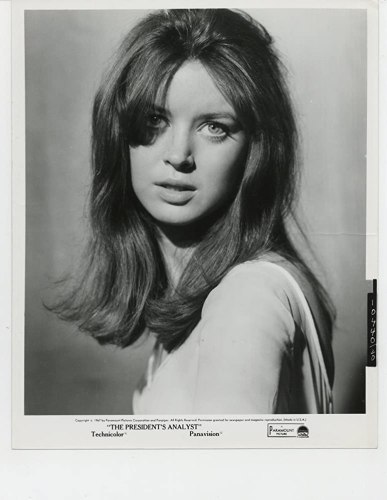