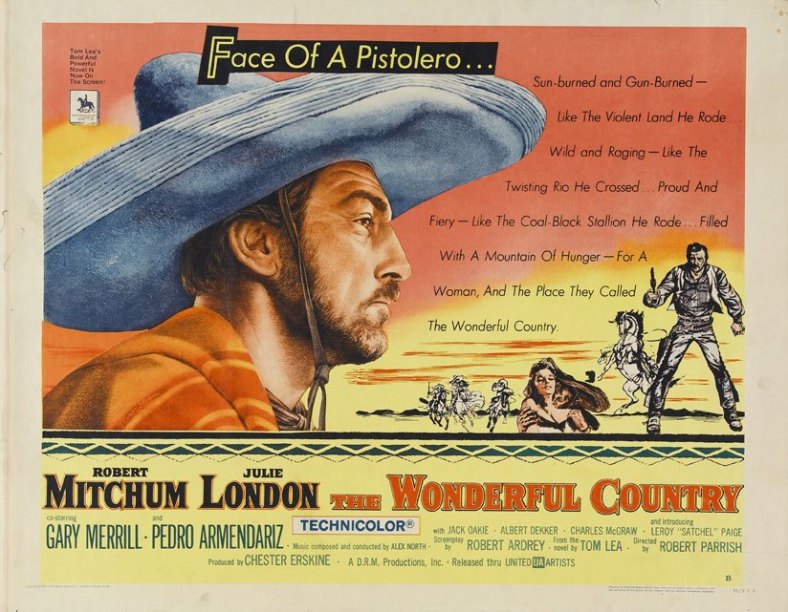 THE WONDERFUL COUNTRY was ignored back in 1959, a smallish gross of $2,900,000 only nudging spot #78 among the moneymakers. Retrospective looks give the 98-minute western a good deal of praise, saluting its focus on characterizations and its impressive cinematography of some prime Mexican scenery. A colorful cast is on hand, and if you want to clearly see the green in Robert Mitchum’s eyes, this is the ticket.

Martin Brady (Mitchum) is an American but he’s spent most of his life in Mexico, using his pistolero skills for the likes of the power-wielding Castro brothers, governor ‘Don Cipriano’ (Pedro Armendariz) and ‘Marcos’ (Victor Manuel Mendoza), a general. Laid up with a broken leg in a border town on the north side of the Rio Grande, Brady holds varying degrees of suspicion, interest, usefulness and desire for a clutch of citizens and officials. A Texas Ranger (Albert Dekker) wants him to join up, a railroad huckster (Jack Oakie) wants him to help a cavalry Major (Gary Merrill) join forces with the Castro’s to deal with Apaches, and the Major’s bored, sexually frustrated wife (Julie London) just wants him.

Directed with flair by Robert Parrish, the screenplay by Robert Ardrey, reworking Tom Lea’s 1952 novel (with blacklisted Walter Bernstein contributing uncredited) is good, only shaggy with the romantic angle. Relationships and sense of place figure strongly. As he did with the excellent, also unsung WW2 story The Purple Plain, Parrish accentuates the atmosphere and drama by having his cameramen (in this case Floyd Crosby and Alex Philipps) make ample use of closeups, as well as capturing handsome vistas in the Mexican countryside around Durango. * 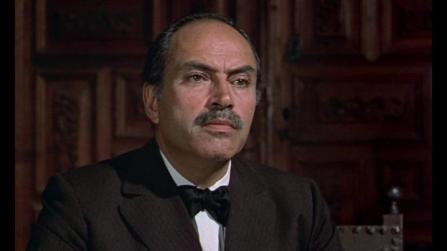 Alex North did the score. The composer designed marvelous ‘Big’ music backgrounds for Spartacus and Cleopatra, among other notable works, but after a nice Mexican-motif flavored opening, his soundtrack here is too frequently over-insistent. The episodic story, with its numerous threads, suffers from post-production cuts (director Parrish’s wife attested to this); while it’s always great to look at, it feels like a fair amount is missing. As the melancholy, soulful, essentially honorable hombre, Mitchum’s quite good; committed on this one (he was Executive Producer). Some may find his accent curious, but if you’ve ever been around long-term expats you’ll know their English often has a decided localized lean, no surprise. The forceful and charismatic Armendariz is always a pleasure. In the last of six westerns she spiced, smoldering 31-year old torch singer Julie London’s an eyeful—and not demeaned as she was a year earlier in the grueling Man Of The West (critics love that movie, it strands me dry ). The normally brusque Dekker gets to be somewhat affable for once, Merrill is steady as the locked-down cuckold, and Oakie plays it appropriately big and hearty as the business tout.

In vivid support are reliables Charles McGraw (he gets some of the best lines), Anthony Caruso (nice to see him playing a good guy for a change), John Banner (his best pre-‘Hogan‘ part), Jay Novello (his role seems cut down), Mike Kellin (wolfing the scenery as he would often do) and Chuck Roberson (bein’ mean, gettin’ plugged for it). The movie jumps the gun on John Ford’s so-so 1960 cavalry saga Sergeant Rutledge by having Merrill’s troopers be “Buffalo soldiers”, and baseball legend Satchel Paige is given a neat turn as their noncom.

I like a lot about this movie, but am not quite as taken with it as I’d hope to be. I have a suspicion it will grow on me: for an unqualified rave, check Glenn Erickson’s in-depth opinion at the indispensable CineSavant.

* Along with providing grand scenery, rough & tumble Durango supplied plenty of discomfort and danger, adding to the lore-store of many a production: there are some great stories pertaining to this one in the Mitchum bio written by Lee Server, “Baby, I Don’t Care”, a treasure trove of anecdotes for the star’s loyal fans. Victoria de Durango was founded in 1563, and today has around 650,000 residents. Dolores del Rio was born there. So was Pancho Villa.  1955s White Feather was the first picture shot in the area. Still a gunslinging cowtown at the time this movie was done, the glorious landscape was a backdrop to less salubrious nightlife. Co-star Caruso: “It was a town, in those days, full of bars and hookers and that’s about it.”  As for the movie itself, director Parrish’s wife Kathie recalled “It was a beautiful picture. Mitchum was terribly good. But he let someone who worked for him take over the picture at the editing stage. She wanted to oversee the cutting of it and she just took it away, wouldn’t let Bob (Parrish) in the cutting room. And it wasn’t ruined but there were all the little things he could have done differently, the pacing, the style, made sharper. And there was nothing Bob could do about it.”