DETROIT  grimly details a particularly brutal and tragic incident during one of the fiery July 1967 nights when the city exploded in one of the worst occurrences of arson, looting and urban violence in US history. Dynamic, adrenaline-juicing director Kathryn Bigelow and screenwriter Mark Boam bring the intensity they injected into war films The Hurt Locker and Zero Dark Thirty (urban warfare) and focus it on “The Algiers Motel Incident”, involving a small group of unarmed civilians who’d barely met and a handful well-armed authorities from different units. Attitudes and methods flare into rage. Responsibility and accountability vaporize. Decency and justice go up in smoke.

With a fast-developing riot scene approaching their concert venue, Larry Reed (Algee Smith) lead singer of the budding R&B group The Dramatics, along with his young valet, flees the melee in the streets; since it’s too risky to get home, they check into a motel for safety. The other guests are a few African-American guys partying with a pair of girls visiting from out of town. The girls are white. They’re all teenagers. When one of the guys foolishly plays with a starter pistol, nearby police and National Guardsmen open fire, charge in and start to determine—with the accent on harshness—who is “the sniper” (there was a lot of that going on elsewhere in the city). Despite the somewhat calming presence of Black security officer Melvin Dismukes (John Boyega) things rapidly degenerate into vicious treatment of the suspects by a trio of white Detroit Police officers, led by eagerly malevolent ‘David Senak’ (Will Poulter). It doesn’t end well.

Unsurprisingly, well-crafted or not, the downbeat material didn’t pull much audience, the $26,000,000 take barely denting a $34,000,000 outlay.  Reviews were mixed, mostly positive, with expected complaints that it did/did not/could’ve/should have done things completely different/perfectly/not at all. Cue: do some quick I.H.K.R. It’s free, it’s harmless (unless you’re an idiot), and it may do some good (again, unless you’re an idiot). * 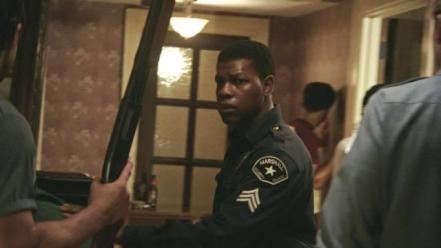 Whether the impact-jonesing director and writer were on target or off base with their selective choices of what to put in or leave out is up for grabs, but what’s on view is compelling, convincing and unarguably well-staged and acted. Boyega and Poulter are especially good.

* I.H.K.R.—Instant History Keyboard Research. Or, go novel, and manage the archaic feat of holding print while looking at it: check out John Hersey’s 1968 book “The Algiers Motel Incident”.

The box office failure may in part have been that, to the present movie going demographic (age, affiliation, awareness, yadda…) bummer historical events from 50 years ago sadly mean next to nothing. It could also be that the current real-time toxic state-of-the-States atmosphere leaves people sufficiently angry and disheartened enough, what with a new strain of racist virus infecting the nation’s bloodstream, amplified by purposely divisive media treatments, directing poisonous agendas for political parasites, all the way to the unearthly orange blob at the top of the cheeseburger chain. “Nowhere to run to, baby/nowhere to hide…” 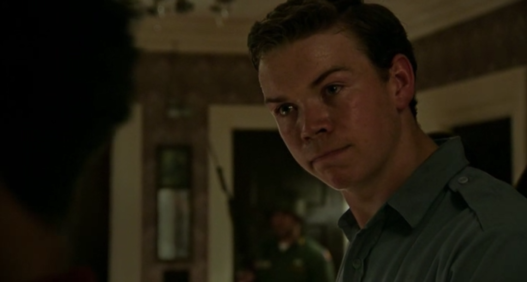