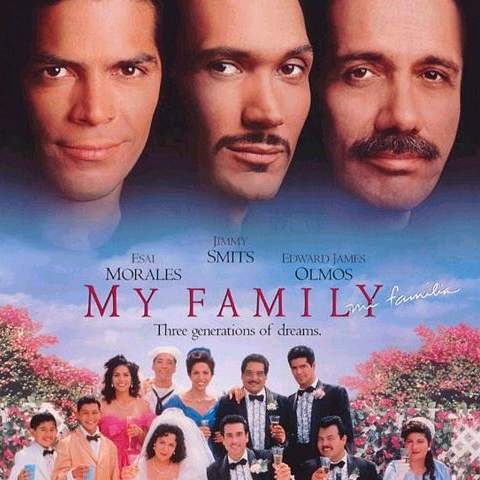 MY FAMILY is the Anglicized general release title of this truly heartwarming multi-generational 1995 pocket-epic from director Gregory Nava, though the alternate Mi Familia seems more appropriate. Still, even though it’s about a Mexican-American clan named Sánchez, and is set mainly in East Los Angeles, the triumphs and tragedies of its characters have a deeply resonant universal appeal that can just as readily apply to any of us, wherever we started from and by whatever arrangement of vowels and consonants we answer to. This beautifully rendered labor of love is one of those “You’ll laugh, you’ll cry” affairs that really do mix just the right flavors essential to deliver that elusive elixir. It’s a humanist feast; full and considerate, healthy and refreshing. 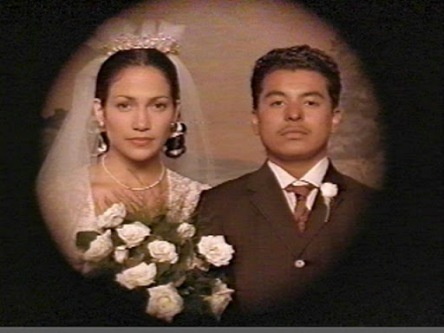 Narrated by writer ‘Paco Sánchez’ (Edward James Olmos), the story of his family begins with his father ‘José’ (Jacob Vargas), trekking from impoverished central Mexico to arrive in the bucolic, promise-offering Los Angeles of the mid 1920s. José is blessed to meet and marry ‘Maria’ (Jennifer Lopez, 25, her first important role) and start a family. Though a citizen, she’s caught in a deportation sweep in 1932, but after great trials, manages to make her way back, and the family grows. Moving up to the late 50s (José and Maria now played by Eduardo López Rojas and Jenny Gago), the story shifts focus to ‘Chucho’ (Esai Morales), the most rebellious of the six children. This segment then gives way to the 1970s, with the tribulations of now grown-up ‘Jimmy’ (Jimmy Smits), whose troubled life is balanced against the relative success of his siblings. The Dream is there, but for too many the deck is stacked. What makes the struggle worthwhile?

Director Nava (El Norte, Selena, Frida) co-wrote with his wife Anna Thomas, taking memories from his own family tree (he was born in San Diego) and blending them into other accounts from families he researched in East L.A. Several studios (including PBS’ “American Playhouse” and Francis Ford Coppola’s American Zoetrope) put up the $5,500,000 for filming in East Los Angeles, and for the Mexico segments, in that country’s State of Michoacán. Edward Lachman, an expert in rich color composition (Far From Heaven) did honor with his lush cinematography, and along with a neat selection of popular tunes from various time frames, Mark McKenzie gave it a fine backing with a subdued and effective orchestral score. Ken Diaz did the great aging work on Gago and Rojas, which sometimes took seven hours to apply; his efforts netted an Oscar nomination for Makeup. Special kudos to set decorator Suzette Sheets and design consultant Pattsi Valdez for their vibrantly expressive arrangements that do  much to complement the ethnographic framework.

The cast is exemplary, the script keen, the direction sensitive: there is humor and heartbreak, dancing and celebrating, mistakes and fights, passion and renewal, growth and acceptance, prejudice and bitterness, tradition honored and trashed—Life. It’s a lovely film. It makes you reflect on and appreciate where you came from, mull who we are—or should be—and treasure the gift of diversity. Walls fall. Love is all we take with us.

Critical reaction was positive, and we fully agree with Roger Ebert’s take: “Their story is told in images of startling beauty and great overflowing energy; it is rare to hear so much laughter from an audience that is also sometimes moved to tears. Few movies like this get made because few filmmakers have the ambition to open their arms wide and embrace so much life.” Box-office wasn’t huge but still was enough to take care of the outlay, with a gross of $11,079,373. *

* It can pay to have drive and talent to go with your smile—J.Lo’s salary was a modest $50,000; two years later for Nava’s Selena she nicked a cool $1,000,000. A boost for Jen, trivia nibbles for those in the bleachers. On that tangential thread, it’s an interesting ethno casting note that in this story of people from Mexico and the Californian Mexican-American experience that Jennifer Lopez, Jimmy Smits and Esai Morales are of Puerto Rican descent, fave Jenny Gago came from Peru and the story’s pachuco vato loco Michael DeLorenzo was Italian/Puerto Rican. Edward James Olmos and Constance Marie hail from Los Angeles. Jacob Vargas, who plays the young Jose, was, like his character, born in Michoacán. 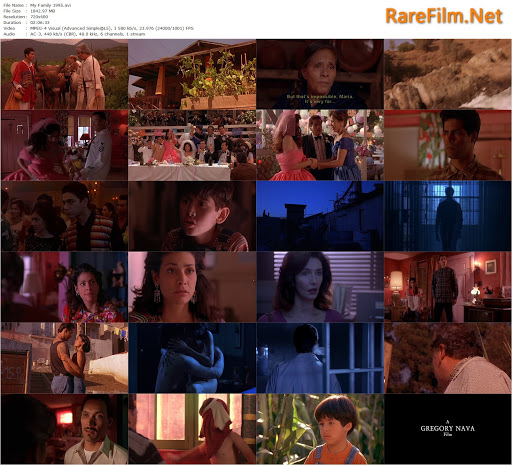