BIG WEDNESDAY, John Milius’ rowdy, sentimental love poem to the surfing culture of his California youth, was expected be a big hit in 1978. Instead it was gnarled by critics and a wipe-out at the box office, the $11,000,000 ode to the concept of ‘Boss‘ grossing but $4,500,000, 95th place for the year. The unabashed valentine to rule-breaking hedonism, a time and place in amber memory (and wishfulness), and the priceless currency of friendship rankles high-brows, yet it has a steadily growing legion of defenders. Damn straight. * 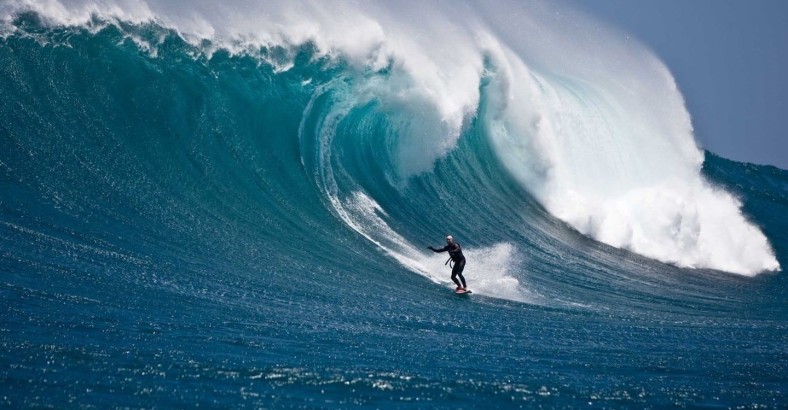 Starting in 1962, the story follows a trio of close Southern California friends into segments set in ’65,’68 and 1974, culminating in the Big day of the title. Bonded by their devotion to the sport—presented here as a way of life—and through indelible shared experiences on dry land, ‘Matt Johnson’ (Jan-Michael Vincent), ‘Jack Barlowe’ (William Katt) and ‘Leroy “the Masochist” Smith’ (Gary Busey) weather parties, road trips, fights, marriage, war, loss and coming of age in a time of change.

“Back home, being young was something you did until you grow up. Here it’s everything.”

Milius and co-writer Dennis Aaberg based the rites-of-passage episodes on their own experiences, on people they knew, and on surf lore from the past. The first part is basically a comedy, the post-Vietnam section understandably more serious. Critics dumped on the movie for its sentiment, for the knockabout humor, and for some reverential pomposity in the narration, extolling surf-zen and extending the spiritual aspects into heroic proportions, skirting mythology. Fair enough.

But what works, wins out, and made what had been a belly flop into a cult favorite with a devoted following is the sincerity of its salute to friendship, the poignant lament for time passing, winning performances from the leads, and some wonderful cinematography. It also boasts an early score from Basil Poledouris (Conan The Barbarian, Robocop, Red Dawn, Starship Troopers), surging with exuberant drama, importing an epic feel into the sensual grandeur of the waves and the visceral, soul-watering thrill of riding them.

Vincent, ripped and intense at 32, Katt, 26 and boy-next-door genial, and Busey, hitting his zany stride at 33, inhabit their recognizable people to a fault, and play expertly off one another. It helps a great deal that they all do much of their own board action, with no back projection nonsense.  It’s also ironic that their fictional characters somewhat mirror their own lives after the film. Busey’s a riot—this same year he “walked the nose” by getting an Oscar nomination for The Buddy Holly Story.  Lee Purcell plays Vincent’s/Matt’s level-headed girlfriend & wife ‘Peggy’; she’s fine, though hers and the other female characters are poorly written.

Sam Melville is ‘Bear’, a sort of surf legend/mentor/father figure to the guys, who ends up in sad shape. He plays it big, and drew a lot of flak for it: it’s broad and obvious but done with gusto and feeling. 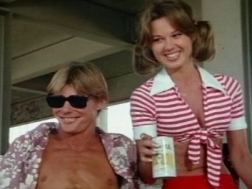 The house party donnybrook with ‘crasher’ creeps from “the Valley” is amusingly over-the-top, but a vivid follow-up brawl that erupts in a Tijuana strip club is not played for laughs. The desperate attempts of the gang to avoid the draft are foolishly funny (Busey rules the sequence, dueling with Army psychologist Joe Spinell). The surfing passages that act as energy outlet and spirit healer between adventures and hurts are just gorgeous. Bruce Surtees was the cameraman; much was done near Malibu, but the wilder wave action was shot over in Hawaii, and in a jot down to El Salvador. For all the stunning swells, pipelines and wipeouts, Surtees most telling shot is a quick few seconds in the otherwise harsh Tijuana segment, with a lovely Mexican girl, poised bereft against the sunrise, a dawning of reality in miniature.

Along with the dramatic score from Poledouris, there are number of nostalgic pop hits from the 60s on the soundtrack and the end credits roll to a really nice ballad sung by Keola & Kapono Beamer.

Not only was the movie’s reception costly to Milius, 33 at the time, in terms of critics giving him any future slack and in the wounding of a project close to him, it also bonked friends Steven Spielberg and George Lucas. His fellow upstarts were so impressed with the idea and script, thinking it was a sure-fire mix of American Graffiti with Jaws in boxoffice potential, that they traded points with Milius on their own pet projects—Close Encounters Of The 3rd Kind and Star Wars. Whoops. Milius made out it of the blue with some hefty green, but it was a kind of a “Point Broken” for his peers. 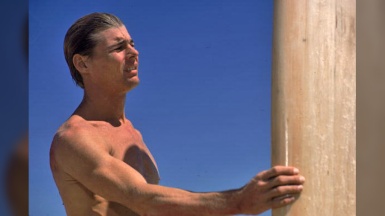 Some of the critical sting the film drew may be traced to irritation over ego excess in the expense laid on for a vanity film, about a few friends, on an arcane subject, only touched before by silliness like the ‘Beach Party’ movies. But one wonders if some of the vitriolic “let’s squash this guy” sneers were also veiled broadsides at the p.c. scorning director because of his flamboyant red-meat politics. If the movie had been made by an auteur in line with the conventional vox populi of ReviewerLand, would they have called it “a brave and daring masterpiece”?

Lucas: “Before Gidget, the image of California was Steinbeck country…The sun, the bikinis and the surfboards all made a statement about California culture. The films might seem trivial, but it’s no coincidence that the giant love-ins were held in San Francisco and not Topeka. Kids across the country saw this new Bohemia and were drawn to  it.”

Milius: ” When I did Big Wednesday my first impressions were that I was going to do this coming-of-age story with Arthurian overtones about surfers that nobody took seriously, their troubled lives made larger than life by their experience with the sea. And that’s what the movie is. It never strayed from that. There was a lot of pressure to make it more like Animal House, but the movie has a huge following now because it did have loftier ambitions.”

Corny or not, in the parlance of by-gone California, Big Wednesday is boss

One thought on “Big Wednesday”