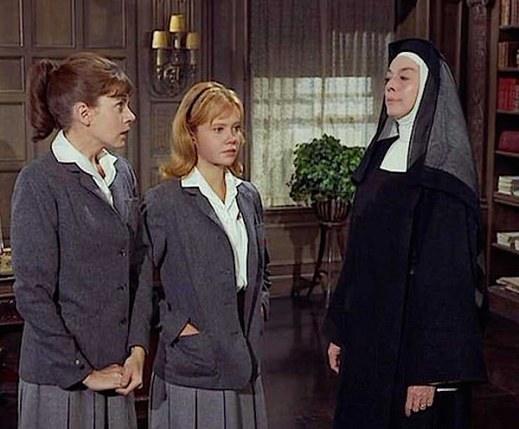 THE TROUBLE WITH ANGELS was a light, completely undemanding, enjoyable way to pass 112 minutes back in 1966. When I was eleven, anything with childhood crush Hayley Mills was a lock, plus Rosalind Russell had been Auntie Mame, so plunking down my $1.50 allowance for a matinee was dutiful.  Wish we could say revisiting it 53 years later was a treat, but today the tame-as-tea hi-jinks add up to a nun-event. Sorry, but that’s a better joke than anything in the movie.

Prank-happy teens ‘Mary Clancy’ (Hayley) and ‘Rachel Devery’ (June Harding) spend three years in St. Francis Academy, a Catholic boarding school for girls. Under the stern but fair tutelage of the Mother Superior (Roz) and a kindly gaggle of nuns, the two make enough mischief for a regiment. Predictably, they learn a few life lessons and eventually come to their senses. 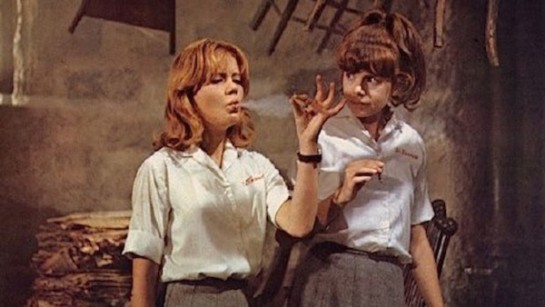 As the Vietnam War kicked into gear, demonstrations and riots increased, and with a goodly share of the young folk beginning to “Turn on, tune in, drop out”, a slice of square pie like this seemed reassuring dessert for a morals-buffeted audience. Enough families hauled in their kids to see something “clean” so that the modest $2,000,000 fluff grossed $10,200,000. The grosses called forth a sequel two years later, but Where Angels Go, Trouble Follows didn’t sell nearly as well, bringing Roz and several of the nunsters back with Stella Stevens as a hip addition. Stella Stevens?–as a…nun? * 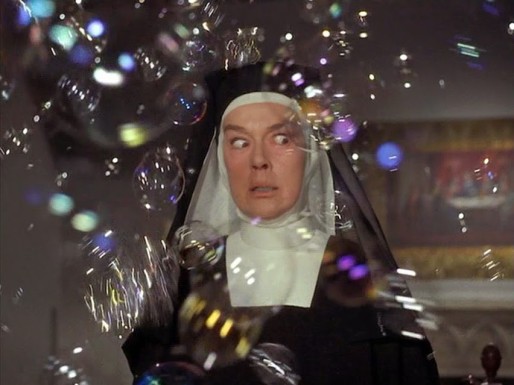 The aching screenplay was written by Blanche Hanalis, from Jane Trahey’s memoir “Life with Mother Superior” and was directed by Ida Lupino, the last of her feature films, and a country mile away her hard-boiled noir items of the 50s. It’s…proficient. With no disparagement to the quicksilver Mills and adept Harding (a Tony winner in her sole film part), the poor scripting jogs recall of a really sharp and winning portrait of two rambunctious teenage girls done two years earlier in the excellent The World Of Henry Orient. 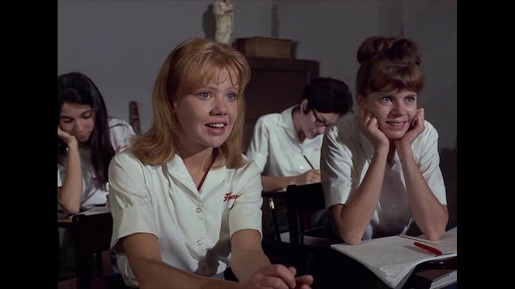 What gives it any juice is provided from just watching Mills and Russell, two unique and cherished acting personalities, wring what life they can from the paper-thin material. Roz, one of Hollywood’s more notable Catholics (if not as self-pious as Loretta Young), embraced the wholesome packet, later remarking “I have been around nuns my whole life and I wanted to do justice with them.” At the same time, freed from five years at Disney, 19-year-old Mills stuck with semi-kid stuff in this movie, even though she was turning into a different kind of kitten off-screen. Like her Mother Superior character, Roz had difficulty with her 39-years-junior co-star, saying in her autobiography “Life Is A Banquet” that Hayley was “a demon. She used to stick out her tongue whenever I passed (she couldn’t stand me) and she was bursting at the seams with repressed sexuality.” 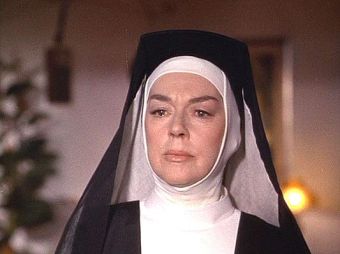 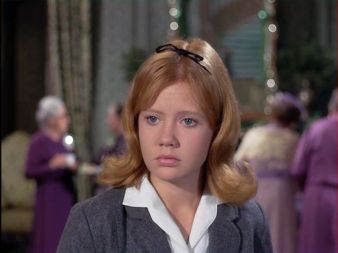 Ironically the success of this picture didn’t follow either actress. For Russell, 58, it was her last hit; succeeding projects flopped. Mills worked steadily (as recently as 2019) but her childhood success did not materialize as an adult, at least in films.

Jerry Goldsmith did the score, one of his few comedies, and while it’s not the first soundtrack you’d seize from his otherwise stellar resume, it keys in effectively for the few dramatic passages. With Barbara Hunter, Mary Wickes, Binnie Barnes, Marge Redmond, Kent Smith and Camilla Sparv (60s sexpot debuting as the polar opposite). Jim Hutton and Gypsy Rose Lee make cameo appearances, his oddly unbilled, hers embarrassingly “cute”.

Still, dated or no, the film evokes fond memories and has many followers, citing its undeniable warmth about friendship, changes and choices. Also noteworthy is that for its time period it is a movie about women, starring women, written by women and directed by a woman. Not a lot of that going on in 1966. 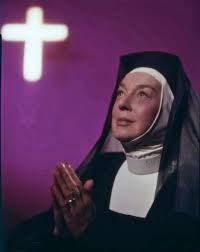 * The $1.50 shelled out long ago by yours truly was devotion to Hayley, not because I’m nuts about grown single women wearing penguin costumes. With all the noise made about The British Invasion, people forget the miniature Clergy Girls Attack of the mid-60s: at #28 on the list of earners, this was four spots ahead of The Singing Nun. A year later a cute novice calling herself ‘Sister Bertille’ (better known as Sally Field) began buzzing across TVs in 82 episodes as The Flying Nun (“with Alejandro Rey”). Of course, they all say Hail Mary’s to the Austrian postulant known as ‘Maria’ , who was known to be “a flibbertigibbet“. The Nun Queen a.k.a. ‘Sister Mary Benedict’ remains Ingrid Bergman in The Bells Of St. Mary’s.

Spoilsports seeking less-wholesome daughters of Christ can find salvation-sanctioned sin via habit-shrouded goblins of Philomena, The Magdalene Sisters or that crone who finked on Steve McQueen in Papillon.

Back to cool nuns:  Deborah Kerr in Black Narcissus and Heaven Knows Mr. Allison, Amy Adams in Doubt, Audrey Hepburn in The Nun’s Story, and the cheery gals of Sister Act and Lilies Of The Field.  Amen. 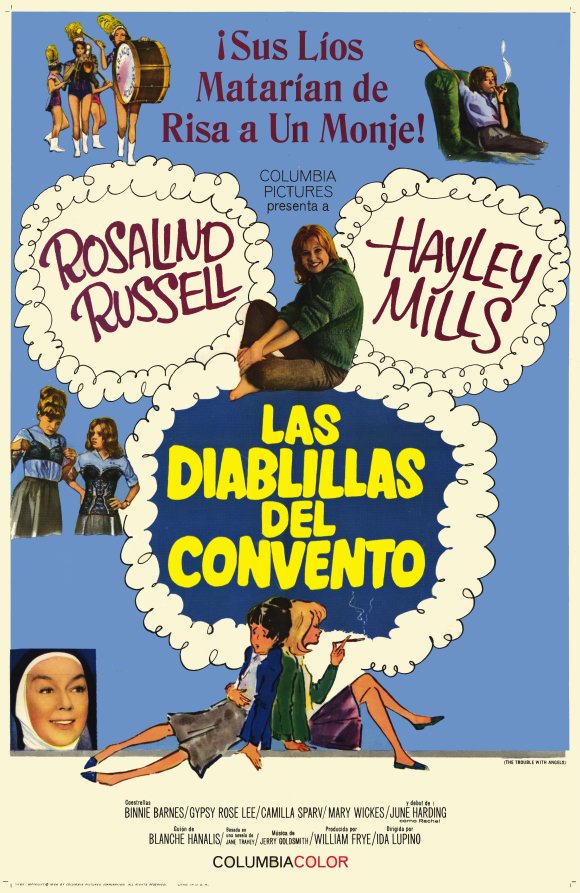