DRIVEN by a long-held desire to make an auto-racing movie, as well as fueled by an internal need to autobiographically exorcise personal demons through fictional characters (again?), 55-year-old Sylvester Stallone floors the accelerator in this 2001 smash-up, dragging another never-say-enough aging action star with him, 65-year-old Burt Reynolds. Stallone wrote it (as well as co-producing), going through 25 drafts to come up with the final selected script, citing his own career problems as the autobiographical fodder. 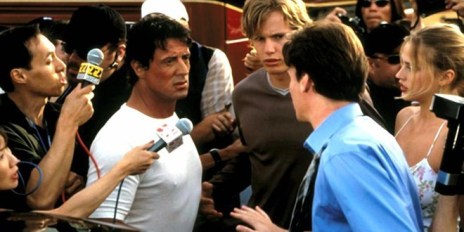 Hot-shot rookie ‘Jimmy Bly’ (Kip Pardue) has focus issues on the track, with hectoring pressure from his manager brother, bitter animosity from his arch rival and an ill-advised romance tussling with the rival’s hot girlfriend all conspiring to get him booted from the roster of team owner ‘Carl Henry’ (Reynolds). Henry puts ‘Joe Tanto’ (Stallone), one-time hero, now semi-humbled, in as the punk’s mentor. Lots of scantily clad, morals-relaxed young women hurl themselves at the ego-conflicted racers. 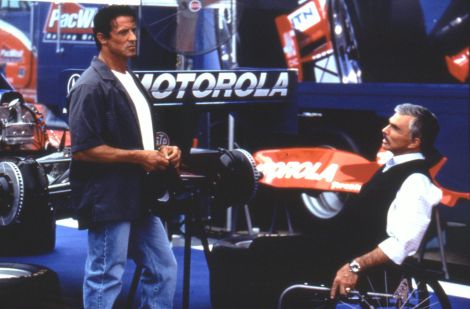 Credit is due the cinematography from Mauro Fiore (Tears Of The Sun, Avatar) and the stunt & effects crews for staging some wild car crashes. Renny Harlin gives it what flair he can with his direction, but the script is insipid, fetishistic drivel. Stallone opts for a sulking, pity-me patina in his performance, while Reynolds character serves similar duty as Robert De Niro’s in Cop Land, taking Sly’s character—and the star—to the woodshed over cheesing out—which, coming from Burt Reynolds, is pretty rich. Burt plays this in a wheelchair, for an extra helping of suppressed pathos, his waxen look not far removed from Madame Tussauds.

”I’m not going down in flames with you, brother — that’s one trip you’re takin’ alone!”  And so on…

Best work comes from Gina Gershon, camping it up as Tanto’s venomous ex-wife. Reviews were scathing and the $94,000,000 mix of noise, toys, boys and cleavage only grossed $54,744,738, lapping 72nd place among the years racers for boxoffice gold.