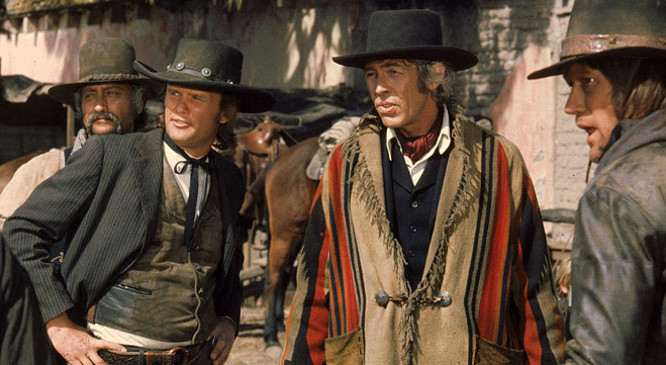 PAT GARRETT AND BILLY THE KID has a brace of splendid moments and elements scattered through its bullet-packed course, a few of them choice enough to command a viewing just for their sake alone. Sadly, you have to endure the rest of a mean, choppy and unrelenting downer to enjoy them, as Sam Peckinpah’s 1973 attempt to make the ultimate statement on those Old West rascals gut-shoots itself with missteps in pretension, pacing and personnel.

Times are changing in 1881 New Mexico, and wild boys like Billy “the Kid” Bonney (Kris Kristofferson) need to get out or go down. Billy’s older friend and mentor Pat Garrett (James Coburn), newly a sheriff, gets the onerous task of hunting down his unrepentant pal. Before the final showdown, half the grungy cowpokes in the territory will receive personal air-conditioning via Colt, Winchester or 12-gauge.

The production was caught in the crossfire of director Peckinpah’s wildly erratic behavior (booze, coke and being a major jerk) and the studio-imposed tyranny of MGM boss James Aubrey, known without affection as “The Smiling Cobra.” *

The film cost $4,639,000, a blood-vessel-bursting 45% over the original budget. Aubrey oversaw re-cuts, and six editors including Roger Spottiswoode (Under Fire) and Robert L.Wolfe (The Wind And The Lion), had their hands in the mix. Released at 106 minutes, it was blasted by reviewers and we Sam-fans expecting some of the glorious punch and passion of The Wild Bunch walked out less than thrilled. Grosses came to $11,000,000, pasturing the picture just 46th place among the year’s herd. **

Time passed, and two versions of restored cuts brought the running time up to 115 minutes and 122. They work better than the original theatrical 106, but while the neat bits keep their shine, the debits are still present. For what it’s worth, some now insist that the formerly dissed picture is, in restored form, a real prize. Uh, nope. When ‘film scholars’ have sex, do they kiss-by-moan analyze it afterwards, letting their partner (assuming said companion is not just a hand) know what it “really meant”?

Filmed down in Durango (the Mexico Mexico), the cinematography by John Coquillin is frequently beautiful. Bob Dylan’s superb lament “Knockin’ On Heaven’s Door” works to great effect in the soundtrack (the classic ballad became a big hit). Costumes and props, gritty feel and a plethora of ker-boom sound effects are what you “wouldn’t have any other way.”

There’s one helluva lotta shootin’, and a couple of the gunfights have some real kick: the  great R.G. Armstrong could project self-justifying malevolence good as anyone this side of a certain President and the wonderful sequence with Slim Pickens, Katy Jurado and L.Q. Jones is magnificent, truly heart-rending.  Coburn is fine, doing what’s required, but his Garrett is dour from the get-go, and it’s a steep hill to raise much sympathy for him.

On the bleeding end of the squib, the casting of Kristofferson (his third film) just doesn’t work. Not only is he a good 15 years older than the real Kid, looking a hundred years out of place, he’s just flat and brooding to boot; as with Coburn’s Garrett, you just don’t give a damn about this sullen, indulgent, boring outlaw. Hot-to-trot newby Bo Hopkins (American Graffiti, The Wild Bunch) was Peckinpah’s original choice–his laid-back yet brazen energy may have made it work substantially better. Along with whatever the alcohol-soaked Peckinpah may have urged, the script by Rudy Wurlitzer doesn’t help. There’s some good salty dialog mixed in with the portentous thudding but too many scenes just lie there, writhing.  Dylan not only contributed the song, but gets a co-starring gig–and it really just amounts to a joke:  as a young audience hip-shot, you may as well have had Ringo Starr.  There are likewise distracting cameos from Jason Robards, Barry Sullivan, Rita Coolidge and Bruce Dern. Near the end, Peckinpah indulges in a cameo of his own and it amounts to hare-kiri.

* Coburn on Aubrey, quoted in If They Move…Kill ‘Em, David Weddle’s Peckinpah bio, said the MGM lion (or in this case, hyena) “would hire big-time directors and top writers and stars, and then step in and fucking destroy the film. He was totally irrational.”

** The ailing genre offered weak entrants that year: Eastwood’s brutal High Plains Drifter, two tired Wayne efforts in Cahill U.S. Marshal and The Train Robbers, the silly My Name Is Nobody, the snooze Showdown and swill in the form of The Man Who Loved Cat Dancing and the wretched The Deadly Trackers. Peckinpah’s flawed epic is better than any of those, but it’s a cryin’ shame that he was unable to pull his personal demons into line enough to make this the movie he intended. All hail Slim and Katy…. 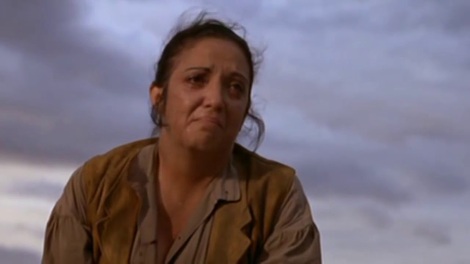