INVASION OF THE BODY SNATCHERS, the ‘hip’ 1978 remake of the cherished mid-50s thriller, could also be considered a ‘continuance’, as early on in the story, the new Carter-Era version of hero ‘Dr.Bennell’ (Donald Sutherland) almost runs his car into the cameo-appearing Kevin McCarthy, plugged into the new invasion by director Philip Kaufman as an homage & link to the earlier classic. At any rate, Kevin’s raved warnings, 32 years down the line, are not enough to keep Sutherland and cute co-star Brooke Adams from running afoul of those wind-floating bastards from outer space. 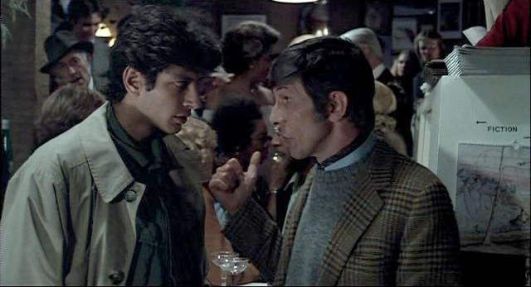 Moving the folksy small-town locale of the ’56 version to the anything-is-cool hive of San Francisco, Kaufman and screenwriter W.D. Richter get to employ ‘freedom’ (swearing, nudity and more visual goop—sure signs of artistic progress) to show what relaxed standards and $3,500,000 can do with the source material. At 117 minutes, 35 minutes longer than the original, they also run the lab-test of nodding you off before the benumbed aliens can do it.

In this take, Sutherland’s character is a city health inspector, and his gal-pal/wish-for-girlfriend (Adams) is a lab scientist for the same department. She notices the odd presence of some flowering plants, brand new to the area, and then sees something ‘different’ in the behavior of her boyfriend (played by Art Hindle). Bennell asks his trendy psychiatrist buddy (Leonard Nimoy) to calm Elizabeth’s worries, but then Bennell’s friends ‘Jack’ and ‘Nancy’ (Jeff Goldblum and Veronica Cartwright) not just sense but see something is rotten in the Golden Gate, and we’re off to the races—as in Human vs. Alien.

Well photographed by Michael Chapman, with a strange and effective music score by Denny Zeitlin, this has some taut moments and creepy special effects, but the padded length works against it, and things begin to sag halfway through, bumping up and down between effective and ennui, lurching from edgy to laughable before it finally wraps up. Do you think there will be happy ending in a sci-fi movie from 1978?  What unearthly GMO did you sprout from?

It made $24,947,000, earning greenback bay #27 for the year, and, judging by whatever passes for verdict on the Internet, has staked out fairly high ground as far as remakes go. Praise was not the case when it came out, and we’re inclined to side with most of the reviews from “back in the day” (a phrase that took ten years off my life to write) rather than the gushes it receives today, likely burbled by invasive interplanetary mind-f-ers.  I remember liking it a good deal when it came out (lo, this-can’t-be-happening, that was 41 years ago!) but a recent revisit sowed seedlings of doubt. The actors are fine, a few of the gross effects have some steam, but I ended up more impressed by the way Brooke Adams could wiggle her eyes at light-speed than with anything else: no way she can be from this planet. Speaking of coming from another galaxy, Pauline Kael called it “maybe the best film of its kind ever made”. That’s enough for me to root for the cosmic bacteria.

With the appearance—along with McCarthy—in cameos, of Don Siegel (director of the original), Kaufman and Robert Duvall (on screen for maybe 3 seconds).