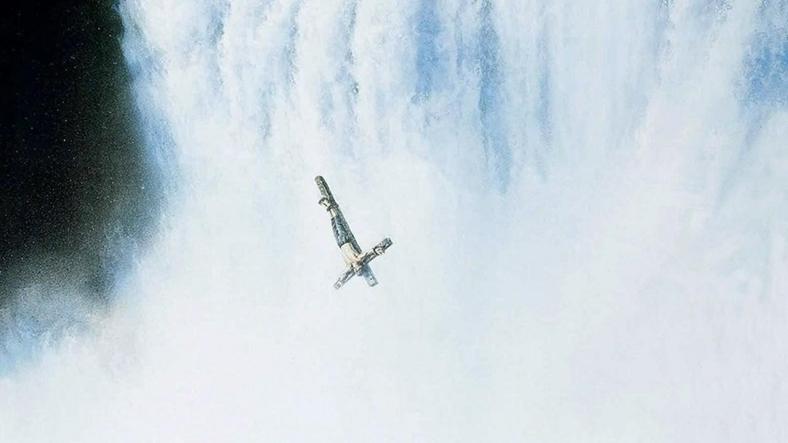 THE MISSION —-“So, your Holiness, now your priests are dead, and I am left alive. But in truth it is I who am dead, and they who live. For as always, your Holiness, the spirit of the dead will survive in the memory of the living.”

The 1750s. Spain and Portugal vie for lands (and the people in them) in the border region shared by Argentina, Paraguay and Brazil. Spanish Jesuit priest ‘Father Gabriel’ (Irons) is among those who oppose enslaving the Indian tribes, instead persuading them peacefully to convert. The Guarani people build him a mission in the jungle. Reformed slaver and convicted murderer ‘Captain Rodrigo Mendoza’ (De Niro) undergoes a grueling penance, converts and enters the Jesuit fold to aid Gabriel. A new treaty between Spain and Portugal threatens the mission and the entire Jesuit order. While a conflicted emissary from the Vatican decides their fate, the resolute priests and their devoted flock gird for battle with an invading force of soldiers, slavers and native allies.

As a history lesson—another in the endless line of dismal defeats qualified by moral courage—it’s respectable.  As a physical production, done a large scale with great care in challenging surroundings, it’s very impressive, conspicuously in the Oscar-winning cinematography by Chris Menges. Apart from the stunning sequences at the falls, which are shared by Brazil and Argentina, the filming was accomplished largely in Colombia, with some work done in Paraguay. Watching some of the actions unfold—trekking, rafting, scaling wet boulders in jungle heat—the word arduous finds a foothold.

As drama that delivers emotional impact, it doesn’t register. Scenes abound that are designed to reach you, but too much feels distanced and the pacing is plodding, the action scenes lack excitement, and the though the acting (well, most of it) is fine, the characters are enigmatic. De Niro cuts a convincing figure as the arrogant plunderer in the first part of the story, and has some compelling moments during the physical and psychic pains of his atonement ritual, but he’s less effective as a sinner converted. His Mediterranean countenance and standard intensity work, but the voice rings more North American than European. Irons isn’t hampered by that, and he’s better, yet the writing and direction don’t give him much room to be more than thoughtful. Ray McAnally is good as the emissary sent to deliver a verdict that will please those who wield power sans pity. 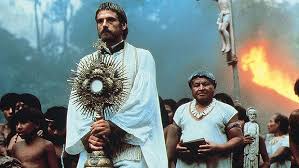 Playing ‘Don Cabeza’, a brutish plantation owner who also happens to be the Spanish provincial governor, character actor Chuck Low is dubbed by Fred Malemed for some reason and it sounds awful, latitudes away from the other cast members an odd blunder given the otherwise meticulous detailing. Early in their careers, in small parts, are Liam Neeson, 33, and Aidan Quinn, 26. They’re fine, but have little to do.

Ennio Morricone’s score is suitably solemn, a bit too much on the ‘straining to uplift’ side for me, but many find it quite moving, which is the idea; if it works for you, more the better.

Aside from the winning camerawork, dutiful Oscar nominations went up for Best Picture, Director, Music Score, Film Editing, Art Direction and Costume Design. Reviews were a mixed bag, everyone praising the package,many feeling that emotionally it underachieved.  Revenues were a disappointing $17,218,000 in the U.S., 50th place in ’86, marking it a big loser against the $25,400,000 it took to mount. *

* Its glories and faults to one side, it’s hard to imagine how the filmmakers—let alone their backers—could think a slow and somber story about thoughtful clerics and indigenous natives—set 250 years ago, in foreign locales, with a tragic ending—could draw sufficient crowds to buoy its expensive budget. A noble sally at any rate, a worthy historical and international civics lesson put to a form where at least more people would see it than ever read about it, or even know it happened at all. Meantime, as with pictures such as 1985’s The Emerald Forest and 1991’s At Play In The Fields Of The Lord, here we are more than three decades later and the indigenous people are still being exploited and the priceless, irreplaceable rain forest is being ravaged like there’s no tomorrow. 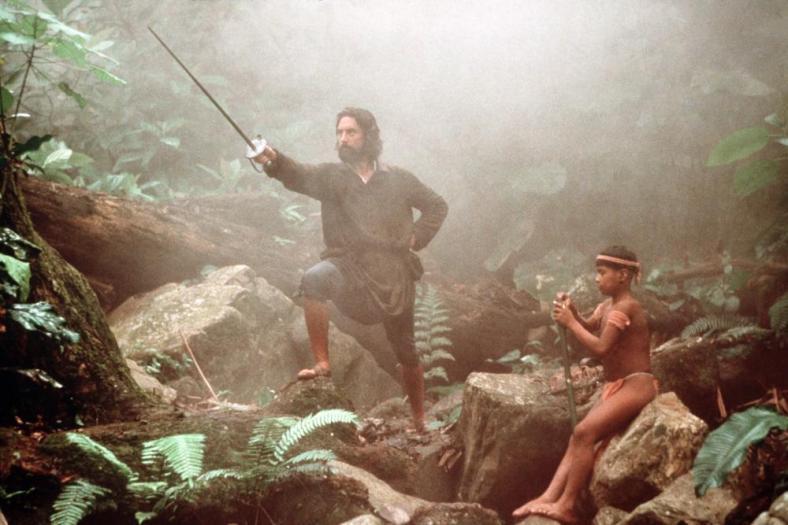