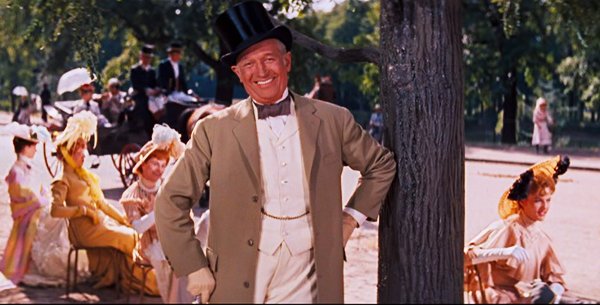 Keep smiling at my little girl, gramps, and you’ll be thanking heaven quicker than you can cry ‘Waterloo’

GIGI was one of three highly touted musicals that adorned big-screens in 1958. South Pacific was #1 at the boxoffice, three spots ahead of this Lerner & Loewe affair, while Damn Yankees trailed at #31. Along with making a pile of dough, this adaptation of a 1944 novella by Colette, directed by Vincente Minnelli, swept through the Oscars like a summer breeze down the Seine, winning all nine of its nominations, plus serving as excuse to give an honorary statue to one if its stars. Perhaps it’s rude to the snide waiter to dump cold, over-oiled bouillabaisse onto a burnt quiche, but we’ll take those other two movies any day of the week.  Excusez-moi pendant que je prends un petit somme. *

“Gay Paree”, early 1900s. Bored womanizer ‘Gaston Lachaille’ (Louis Jourdan) is enamored of young and virginal ‘Gigi’ (Leslie Caron), and she has a girlish crush on him. Gigi’s grandmother, ‘Madame Alvarez’ (Hermione Gingold), presumes Gigi will follow family tradition and become a courtesan. Gaston’s roguish uncle ‘Honoré (Maurice Chevalier), who’d previously sown his own romance with grand-mama, observes the heart machinations with amused affection. Everyone is dressed to the nines.

“Why are those un-nominated films allowed in such posh surroundings. I shall speak to the foo-foo lobby at once!”

Including the Overture, there are 13 musical numbers, and one reprise. “Thank Heaven for Little Girls” and “I Remember It Well” are the best known, the rest of the score is proficient but indifferent. Those two famous songs likely keep some cachet of nostalgia-respectabilty due to their having been repeated ad nauseum on TV variety shows in the 60s. The genteel trappings apparently charm the elegant socks off many, but to my remembering-others-as-well sensibilities the gambit just feels like a forced Gallic retread of Lerner & Loewe’s earlier stage success My Fair Lady.  The presumption that more whining from the idle rich about their “problems”, wrist-flipped while swimming in luxury and cloaked in servile tradition, is somehow deliriously enchanting, hits flat notes in this boudoir. “But, surely, my astonishing American friend, everyone loves Gigi !”  Au contraire.

Verily, Caron is ever-fetching, Gingold always worth listening to, the Cecil Beaton costumes are without argument an eyeful, and the sets are superbly appointed. It’s smooth, it looks great, but it doesn’t take too long before watching it becomes a fight to stay awake.  Jourdan may well have been a great guy, but he’s too cold a screen presence to care if he can learn to appreciate Caron’s sweetie. Chevalier?–well, he was superb in 1961s Fanny, but mostly that whole, dated boulevardier “charm” schtick belongs back in the thankless ‘whatever’ attitude that gave us World War 1.  To each their own.

Pooh to your injured opinion, monsieur: “Chicago” was much worse

* Oui, oui, professionally appointed Gigi can keep the statues for Art Direction, Costume Design and Song, but the rest of its trophies belong on different mantles. Beyond the other worthy films up for the big prize (Cat On A Hot Tin Roof, Separate Tables, Auntie Mame and The Defiant Ones), the froufrou-blinded Academy blew off Vertigo with just two nominations, and showed zip for both Touch Of Evil and A Night To Remember. Other 1958 pictures besides Gigi more rewarding to kick back with: The Big Country, The Vikings, Run Silent Run Deep, No Time For Sergeants, God’s Little Acre, Cowboy, The Brothers Karamazov.

Yes, I remember it well:  that snoozer “An American In Paris” did not deserve Best Picture, either…