THE CHARGE OF THE LIGHT BRIGADE made a huge impression on me as a little boy. That guy doing all the fightin’ stuff was really cool (he was). The attack on the fort was neato (it was). The mushy love-stuff was dopey (it was). And that big charge at the end was totally boss (it was). All those child-wise summations of this 1936 classic hold up sixty years later, 83 years since the blithely inaccurate rouser wowed audiences. Alas, today, knowing the actual history of the infamous debacle, one’s jaw drops at the screenplay’s absence of reality and conscience takes a bruising as you flinch at the wholesale animal abuse. “Bring on the Empty Horses”. *

In 1854, during the absurd Crimean War (England, France and Ottoman Turkey vs. Russia) a brigade of British cavalry made–thanks to miscommunication—a frontal assault on an outnumbering enemy in fortified positions on the heights of Balaclava (in present-day Ukraine). The valorous and costly blunder was quickly immortalized in verse by Alfred, Lord Tennyson. Feuding over blame, the appallingly inept senior officers were not sacked, but promoted. God Save the Queen! **

Hollywood in the 30s fawned over England and the British Empire (enjoy that never-setting Sun while you can, chaps), and the brothers Warner put their two hot new stars from Captain Blood together, assigned warhorse Michael Curtiz to direct and spent something like $1,330,000 (a lot of moola then) to make a stirring action epic that’s only link to the real event was the fact of charge itself. Using Tennyson’s poem—which generations of students had dutifully memorized—as a heroic springboard, Michael Jacoby’s story fabricates like a President caught lying on tape, and the screenplay he wrote with Rowland Leigh leaves History bleeding on the field. 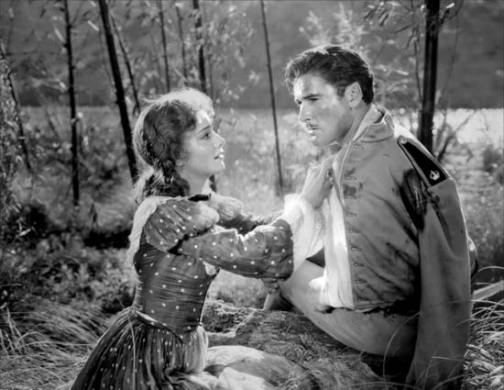 “Well, I’ll finish my drink. I have a cowardly aversion to meeting reptiles socially ’til I’ve had at least one sherry and bitters.”

On duty in ‘Suristan’, dashing ‘Major Geoffrey Vickers’ (Errol Flynn) not only has to contend with the villainy—pointed beard variety—of ‘Surat Khan’ (C. Henry Gordon), who massacres his friends, he has to man-handle losing his betrothed ‘Elsa’ (Olivia de Havilland) to his own brother, ‘Capt. Perry Vickers’ (Patric Knowles). Revenge on the Khan, and simultaneously curing a broken heart (through suicide) present themselves to Geoffrey when his unit is sent to The Crimea. Changing orders to suit vengeance and honor (and incur a lot of casualties) lets the spurned Major lead the famous Charge.

“Surat Khan is on the field with the opposing Russian forces. The same Surat Khan who massacred the women and children of Chukoti. Our chance has come! Show no mercy! Let no power on Earth stop you! Prove to the world that no man could kill women and children and live to boast of it! Men of the Twenty-seventh. our objective is Surat Khan! Forward! ” 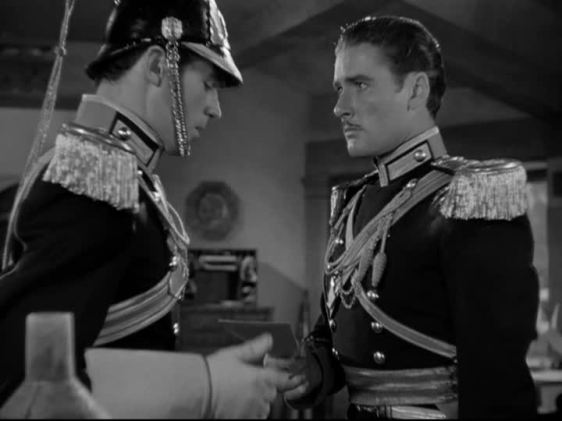 If only Geopolitics and heartache were so easily dispatched. Forget the women & kids being butchered: how do you deal with losing your girlfriend to someone named Perry Vickers?

Flynn was tailor-made for such derring-poo, de Havilland flutters prettily, the hardy group of supporting players face the music of the material with stalwart dignity. Knowles is stiff as a board, and the romantic triangle slows things down. The attack on the garrison at ‘Chukoti’ is done on a big and furious scale, and holds up quite nicely.

California locations standing in for ‘Suristan’, the Khyber Pass and The Crimea included the Lone Pine region of the Sierras, Lake Sherwood, and the then-open areas around Agoura and Woodland Hills.

Max Steiner’s score was the first of 140 he’d work on for Warner Brothers, and his pulsing accompaniment to the advancing horses amplifies the menacing excitement of the finale: Steiner was a master at conveying the momentum of a canter, a prance, a gallop and a full-throttle charge.

Ah, yes, that charge…a doozy of a battle scene, for sure, expertly photographed and edited and punctuated by Warner’s sound effects and the music, as hundreds of costumed extras ride pell-mell into a recreated maelstrom of 19th-century martial madness. Trouble is, said re-imagining of cavalry carnage by the standards of 20th-century moviemakers, circa 1936, is enough to have you break off a tooth from grimacing over the murderous horse-falls. Curtiz didn’t give a damn about the livestock (let alone the humans) and 2nd-unit director B. Reeves Eason and his stunt crew used the cruel “Running W’ technique. Wire and cuffs attached to horse’s forelegs ran through slip rings on the saddle cinch.  Anchored to the ground via a stake, the wire went taut as the horse raced past. Their front legs would be yanked up toward the belly, with an ensuing brutal tumble. Humane outcry over the device eventually had it banned (in America, anyway). Cinematically, the sequence is a killer: tragically, it really was. 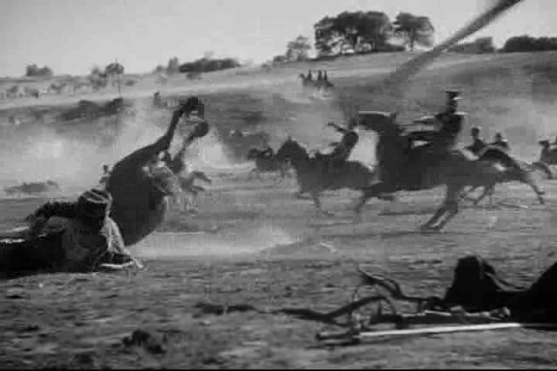 On hand to sputter balderdash and/or die for Her Majesty: Henry Stephenson, Nigel Bruce, Donald Crisp, David Niven, G.P. Huntley, Robert Barrat, Spring Byington, J. Carrol Naish (13 credits that year). Assistant Director Jack Sullivan won an Oscar, and both the Score (the studio music department, not Steiner) and the Sound crew were nominated. The $3,900,000 gross made it one of the year’s big hits. Remade, with an entirely different attitude, in 1968.

* “Bring on the empty horses” (as in riderless), an example of  Hungarian-born director Curtiz’ mangling of English, struck newcomer Niven as so hilarious and apropos of Hollyfoolishness that he used it later as the title to his 2nd book of reminiscences. Flynn detested the imperious director (& vice-versa), almost to the point of violence, not least over Curtiz and 2nd-unit director “Breezy” Eason using trip wires on 125 horses during the charge sequence. Twenty-five of those unwary creatures were either killed outright (snapping necks) or put down later (splintered legs and backs) by the devices. A stunt man was killed when he fell on his sword (Curtiz demanded the tips removed for ‘realism’). 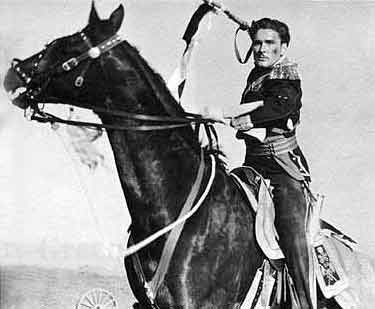 On a lighter note, Errol, 26, smitten by 19-year-old Olivia, boyishly pestered and pranked her throughout the shoot, their 2nd of eight teamings. While furthering the two young stars—and sticking a Union Jack through history’s heart—the picture was a boost for Flynn’s pal Niven, also 26. They shared a beach house in Malibu, party-ish enough that Carole Lombard nicknamed it “Cirrhosis by the Sea.”

** 670 lancers made the charge against more than 50 entrenched cannons that were supported by 5,000 Russian cavalry. The Light Brigade lost 118 killed, had 127 wounded, 60 taken prisoner. 335 of their horses didn’t make it.  As for ‘Suristan’, well, it stood in place for the NW Frontier of India and Afghanistan. “Sure-istan”–hey, who’ll know? Pretty much few: though it’s standard practice for reviewers and/or history buffs to take snide potshots at the movies making mincemeat of the record, geography and logic, ponder the sad reality that most of your fellow citizens don’t know India from Ireland or Indiana, and think World War 2 was when Abraham Reagan freed Vietnam. Forward the Lightweight Brigades, on to Crimea….