THE VIKINGS descended upon moviegoers in 1958, 116 minutes of lusty fjord-born mayhem that carried off loot by the keg, $18,000,000 worth, the 6th most-witnessed brawl of the year. An energetic cast, jarring action, rousing music and majestic locations make this childhood fave still fun to revisit. After all, as Orson Welles opening narration pronounces “It was not an accident that the English Book of Prayer contained this sentence: “Protect us, oh Lord, from the wrath of the Northmen.”

The mid-800’s. Legendary Scandinavian badass Ragnar raids scared-s—less Britain with impunity, and his gleefully nasty son ‘Einar’ bodes to be even less gentle. A captured English princess (breathtaking construction variety, with unusual American accent) and a rebellious slave, wails to Odin, hounds baying for people-meat, hurled battle axes and lots of cool Real Boy stuff see that oars are danced on, ale is sloshed and arrows find their mark.

“Let us proceed to the kennels… The royal pets are hungry!”

Richard Fleischer’s career as a director was an interesting mix of the Very Good and the Really Bad–this rowdy adventure rates as one of his best. The handsomely outfitted $3,500,000 production is greatly helped with Jack Cardiff as cinematographer, getting the most out of the physically taxing location shooting in Norway, France, Germany and Croatia. Kirk Douglas is ‘Einar, and he throws himself into the meanie role with full-Kirk gusto, getting his eye scooped out by a hunting falcon, wenching, clambering up a drawbridge and most memorably, doing a skipping jig on the oars of a Dragon Boat.

Tony Curtis does sturdy work as ‘Eric’, seething good guy/slave/sired bastard/noble who spirits the princess away and brings down Norse fury (of all kinds of fury, one to avoid). The damsel in distress is Janet Leigh, poured into garments so tight that only Tony’s thoughtful ripping them open (so she can help row–sure, I’ll buy that) can relieve the audience of wondering when something like that will happen. Ernest Borgnine has a swell time as Ragnar, bellowing so you could hear him in Nova Scotia.

“Look how he glares at me. If he wasn’t fathered by the black ram in the full of the moon my name is not Ragnar.” *

The medium-sized production was done with enough care in props, costumes, makeup, livestock, stunt work and overall sense of time, attitude and place that it’s easy to be carried along by the packaging alone, and the camerawork is truly grand—the fjords are just magnificent. Three full-scale Norse raiding vessels were built. There’s a cool castle conquest and a class-A Viking Funeral at sunset–what more do you need?  Mario Nascimbene’s score is lovely accompaniment to the grand shots of the boats gliding past cliffs and waterfalls, and is fully unleashed during the finale credits, with a thunderous rendition of the Main Theme.

* Calder Willingham’s screenplay was inspired by adventure writer Edison Marshall’s 1951 novel “The Viking” and from centuries-old myths of Ragnar Lothbrok, whose exploits churn from a variety of long-gone tale-spinners. The movie’s success inspired a brief TV series in 1959-60, Tales Of The Vikings. Cameraman Jack Cardiff directed 1964s goofy bonkfest that was The Long Ships. We can’t speak to the recent hit TV series Vikings that began in 2013, but the run of “Saxon stories” novels by Bernard Cornwell are prime cut. They started back in 2004 with “The Last Kingdom” and have been followed by 10 more so far. “O-Dinnn!”

This saga also started a good go for Australian supporting actor—and real life ‘character’—Frank Thring, playing the viperish King Aella (he cuts off Tony’s hand!). Thring followed by costuming up for swine duty in Ben-Hur,(as Pontius Pilate), King Of Kings (as Herod) and El Cid. Sort of a “quick, get me a degenerate” type, ala Strother Martin, except bigger and even more outrageously theatrical. 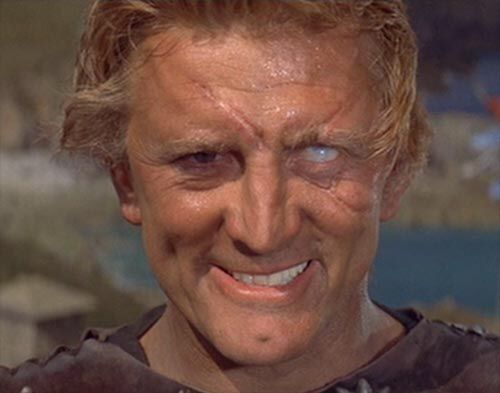