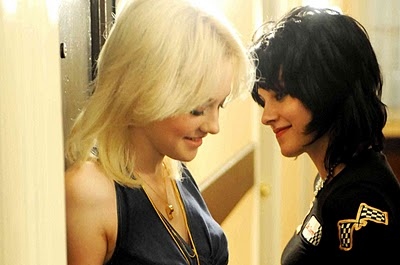 THE RUNAWAYS ripped a wild-child path through rock & roll history from 1975 to 1979, when the all-female band, extra-rowdy Southern California teenagers, blended hard rock with the glam that was a big deal at the time, amped the jailbait sex quotient, fell prey to the usual excess and exploitation, broke up and went their separate ways. Suitably kick-ass, the 2010 movie concentrates mainly on singer Cherie Currie and lead guitarist Joan Jett. Written & directed in her feature debut by flamboyant photographer and music video director Floria Sigismondi, it’s based mainly off Currie’s book “Neon Angel: A Memoir Of A Runaway”. Jett participated as Executive Producer. Rock the f– on…

“I like your style. A little Bowie, a little Bardot, and a look on your face that says I could kick the shit out of a truck driver.”

L.A., the mid-70s. Tough-minded teenager Joan Jett (Kristen Stewart, 19) is determined to make something of herself as rock guitarist, and links with brazen record producer/promoter/crazy bastard Kim Fowley (Michael Shannon). With a few other hopefuls they form a fledgling all-girl band, joined by another angry teen, Cherie Currie (Dakota Fanning, 15), whose homelife is a sad joke. She’s hot, blonde and sings like a banshee on fire. Under Fowley’s exceptionally harsh form of discipline, the girls get good at what they do, and do it until fame, naivete and self-abuse bash them into hard rock’s hard knocks reality. 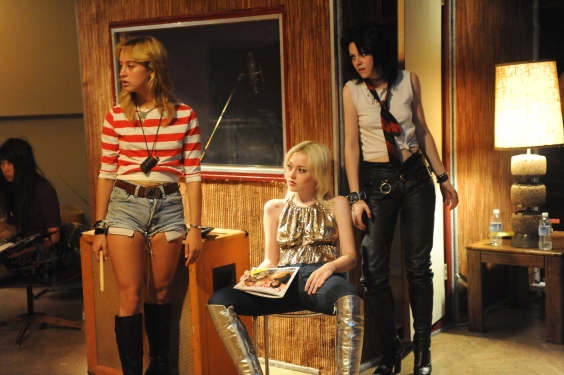 The Runaways were never any threat to The Rolling Stones, but they sold fierce sex and hard riffs with a desperate flavor of alienated intensity fit to grab attention and audience. The movie bats it across, greatly enhanced by the cast, who—true to the people they play—go straight for the throat. Fanning cuts into the Currie pathos, and Stewart is dead-center as Joan Jett. Shannon’s grotesquely amusing lunatic Fowley is another coup in his gallery of unnerving characters, best encountered from the safety of a movie screen. A fourth noteworthy performance comes from Riley Keough, 20 in her first acting gig, as Cherie’s sister Marie, left to deal with the family while sis hits the big-time (which hits her back, hard). Since it’s mostly based off Currie’s book, the script leans more to her angle, and it leaves Jett’s backstory a guess; the other band members get little play. *

106 minutes, with Scout-Taylor Compton (as Lita Ford), Stella Maeve (as drummer Sandy West), Johnny Lewis, Tatum O’Neal (a real-life Hollyweird success casualty, as the mother of the Currie kittens) and Alia Shawcat (a fictionalized ‘Robin Robbins’ in lieu of bass player Jackie Fox). The soundtrack rocks as required, with the group’s simple but raw energy tunes. Rock music purists laugh off The Runaways, but then those wankers are about as much of a drag as highbrow movie critics.

* Riley Keough is grandchild to Elvis and Priscilla: you can see some of The King’s visage in her face. Joan Jett, thanks to killer perseverance, stage presence and the ability to basically kick ass, was the Runaway who ran away with stardom–she’s still pounding it out. Cherie Currie acted a bit (not at all bad in 1980s Foxes, with Jodie Foster), got into chainsaw art, and continues to work on albums. That “Cherry Bomb” herself is approaching sixty staggers me in what’s left of my tracks. Guitar punisher Lita Ford has not surrendered—the take-no-prisoners Lita always struck me as someone who could rip off your legs–or something in the vicinity. Drummer Sandy West had a rough go later and died from lung cancer in 2006; she was 47. Bass player Jackie Fox didn’t wish to lend her name to the film (cue the fictional Robin played by Shawcat); she went on to graduate summa cum laude from UCLA, B.A. in Linguistics and Italian, then went on to Harvard. She became an entertainment attorney and author. Their controversial Svengali, Kim Fowley (the son of old character actor Douglas Fowley!), went to the great night club rave in the sky in 2015, at 75. 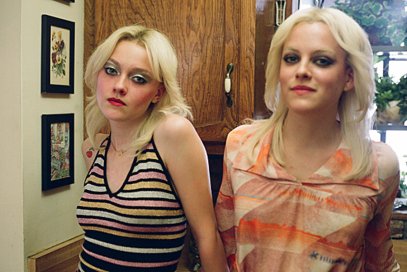 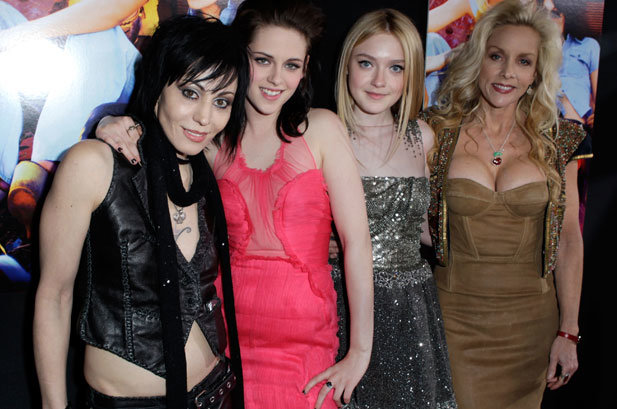