DEVIL’S ADVOCATE  essentially equates lawyers with the literal spawn of Satan. So, we’re talking non-fiction.  Since 1967, Andrew Neiderman wrote—both under his own name and as a ghost writer for V.C. Andrews—over 100 novels, the most famous being the 1990 bestseller that eventually birthed this 1997 urban horror flick starring Keanu Reeves, Al Pacino and two scorching newcomers, Charlize Theron and Connie Nielsen. Directed by Taylor Hackford, scripted by Jonathan Lemkin and Tony Gilroy, the sleek, well-appointed 144-minute walk on the dark side consumed $57,000,000, then ranked 27th place in the States for the year, nocking back a global gross of $152,000,000. 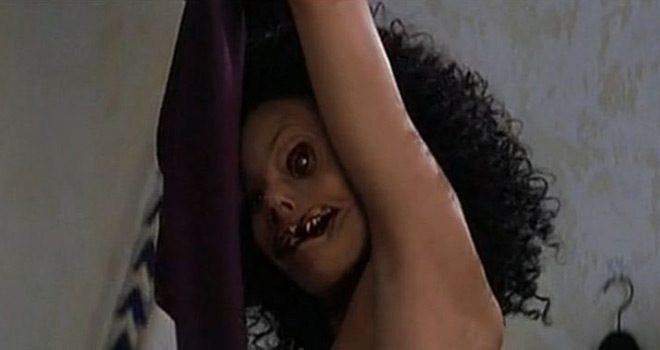 Incorporating elements from Faust, from “Paradise Lost” (i.e. the original John Milton’s), from Dante, and from modern Satanic-speculations like Rosemary’s Baby and The Omen, the story has deep-rooted fear hooks built-in. The generally accepted loathing of what lawyers do with the law helps seduce an audience into going along with the fantasy. The script has some well-crafted arguments for the actors to bandy about, along with generous doses of sex sizzle.

Reeves is 50-50; he cuts a fine figure and sells intensity with his expressions and demeanor, but that’s frequently undercut by his vocal delivery, which too often clanks hollow (plus a shaky Southern accent). Pacino is in hamming mode, which suits the role, so he plays it big, as the Ultimate Bad Guy is not lacking in confidence and giddy bad cheer (it’s the Yell Mode he employed in Scent Of A Woman, Dick Tracy, etc.). Theron, 21 in her breakout role, out-acts the men. Denmark’s stunning Connie Nielsen has her first role in an English-language film, and steals attention whenever she’s present. *

The cool grotesque demon faces were designed by Rick Baker. With Craig T. Nelson, Jeffrey Jones, Judith Ivey, Tamara Tunie, Debra Monk and Delroy Lindo. Speaking of advocating excess and sin, one of the scenes was shot in Donald Trump’s apartment, back when he was just a New York City real estate scammer.

* Connie Nielsen, 31 here, had been working as a model and had acted in French and Italian films for a decade prior to burning up the background as one of Devil Al’s demonic disciples. Ms. Nielsen speaks Danish, English, French, German, Italian, Norwegian, Swedish and Spanish. She could just make unintelligible noises and get no complaints.