WHERE DO WE GO NOW?  is the second feature film gift from the stunning and multi-talented Lebanese actress Nadine Labaki, following her lovely Caramel from 2007. She came up with the unique storyline for this 2011 slice-of-disturbed-life comedy-drama, co-wrote the screenplay, directed it and acts as one of the principals. She scores in all departments. 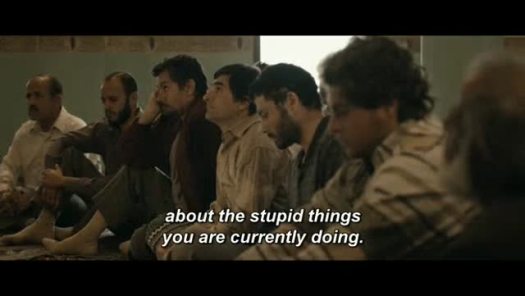 A remote village, shared by Christians and Muslims, has already suffered losses from fratricidal battles, the dead sharing opposite sides of the graveyard. Peace is tenuous, and word filtering in from outside about more fighting may trigger new violence. The pride-blinded men are ready to erupt at their neighbors and friends at the drop of a hat, but the women of both faiths—many of whom have already lost husbands, fathers and sons, are fed up with the lunacy. The ladies, smart enough to keep differences confined to bickering, come up with a naughty scheme to distract the cloddish men and foil another useless bloodbath. A troupe of sexy (if somewhat bedraggled) Ukrainian exotic dancers are recruited to help carry out the desperate ruse.

Filmed mostly in the village of Taybeh, in rugged hills near ancient Baalbek, around 40 miles from Beirut, the script does not indicate Lebanon specifically, but uses the backdrop as a generalized Middle-Eastern locale, so that the indictment of mindless ongoing conflict (in this case, religious) that tears otherwise peaceful communities apart isn’t restricted to one country or ethnicity. 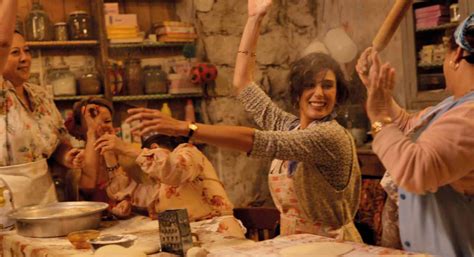 Lataki’s tale has a serious message, and there are moments of pain and loss, but primarily she uses humor as her weapon of choice, and handpicked a superb cast of markedly individual types to deliver the goods, many of them first-time actors. It’s a remarkable group, without a false note in the bunch. They include Yvonne Malouf (‘Yvonne’, the harried mayor’s decisive wife), Julian Farhat (‘Rabih’, the village painter, a laid-back Muslim enamored of Lataki’s lonely Christian cafe-owner ‘Amale’) and Claude Baz Moussawbaa (as the twice-bereaved ‘Takla’, her expression of grief is just heart-wrenching, and her scene challenging The Virgin Mary is magnificent). Ms.Lataki is fiery, strong and meltingly beautiful, an enchanting screen persona, and her behind-the-work as director shows a command of casting acumen and character nuance, capturing both glee and heartache; a camera eye as beguiling as those glowing from her face.

Done for a modest $6,700,000.  Cogerson lists it taking only $600,000 in the States (possible) while other sources have it grossing perhaps $21,000,000 internationally. At any rate, it was a huge hit in Lebanon. A 102-minute charmer, with thematic echoes from the ancient Greek drama Lysistrata, it’s shrewd and observant, sentimental and warm, very funny and telling, with a perfect closing line.