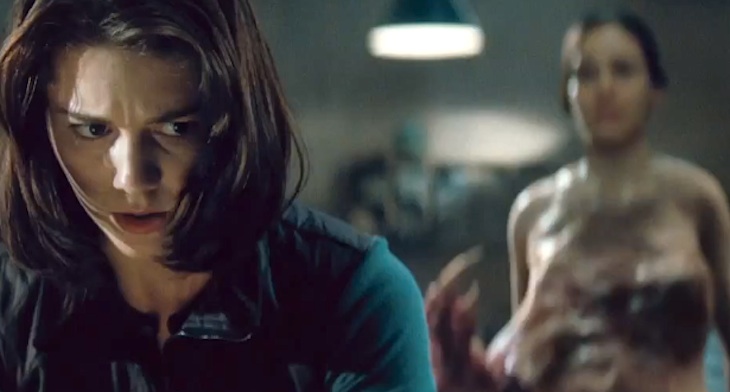 THE THING  and its third foray into human mutation-imitation is not a remake of the 1951 classic, but a prequel homage to the second classic made from John W. Campbell Jr.’s 1938 novella “Who Goes There?”  Directed by Matthijs van Heijningen Jr., written by Eric Heisserer (Arrival), the 2011 chiller sets up things (so to speak) for the John Carpenter-Kurt Russell favorite that came out (and grossed-out) back in 1982. While not as tip-top as the earlier films, it’s a more than worthy enough entry on its own merits.

“That’s not a dog! Start the helicopter now!”

Antarctica, 1982. Members of a Norwegian research station (what is Norway doing on the South Pole? never mind) find a gigantic alien spacecraft buried in the ice. The imperious ‘Dr. Halvorson’ (Ulrich Thomsen) convinces American paleontologist ‘Kate Lloyd’ (Mary Elizabeth Winstead) to copter in and help examine the passenger specimen that’s been locked in frozen slumber for 100,000 years. Taking the dictum “Revenge is best served cold” to heart, the horrific space visitor shortly makes Hell on ice for the unprepared and outclassed humans, who are also, in the best monster fable tradition, puny and delectable.

As with the previous films, Campbell’s story makes sure-fire, cold-blooded paranoia & peril material, and the director, writer, cast and production team went to great pains to match settings and events from the Carpenter version, yet also avoid aping it; they give a fresh spin to the treatment.  It works to have the winsome Winstead add some updated fem-power to what had been a guys-only setup; she’s a viable heroine (shown again in 10 Cloverfield Lane). The elaborately gruesome special effects were a mix of full-scale animatronic creations, actors and stunt folks in costumes and makeup, and then added CGI.

Just as the Thing mimicked humans, the film had the ironic and disappointing fate to emulate the movie it was born from. While it’s now regarded (justifiably) as a classic, the 1982 movie had failed financially and was idiotically ripped to shreds by critics (find “So-TF-what?”, inject here). Likewise, this diabolical fight-to-the-finish went unappreciated, with tepid reviews, a major loser money-wise: costing $38,000,000, it only brought in $31,500,000. A shame, after all the hard work; it’s a solid fright flick, and should see its reputation continue to improve as time goes by—and the Thing has plenty of time on its assortment of hands… * 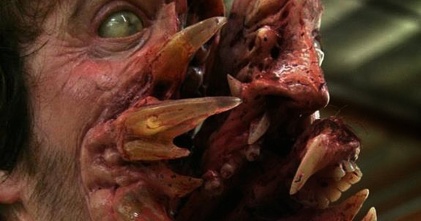 * It did manage to bring in another $10,112,000 from disc sales. Wondering: uh, what would a research station be doing with grenades and flamethrowers?