ELEPHANT, on release in 2003, drew a swoongush of praise from around three-quarters of the reviewing pep squad, while one out of four felt cheated, as if they’d been given a test with bogus trick questions. I recall being struck by it on initial view, but a recent revisit nudged me into the nay-say camp. So far, changing your mind hasn’t been banned.

A High School in Portland, Oregon. Interlacing the pathways of a number of students on a day when two of them show up with bags of weapons and commence a killing spree, this was directed, written (if you can call it that) and edited by Gus Van Sant.  It features mostly unknown actors, improvising their dialogue (poorly), pretentious use of endlessly long, numb-inducing tracking camera takes, repeating actions from various viewpoints—mostly just the assorted kids walking through school and talking (vacantly) to their friends.

There’s a certain amount of tension inherent in the ominous buildup, but the cold end result feels as arbitrary and pointless as the type of event it portrays.  Doubtless it was made with good intentions, but the distancing effect, the lazy, wafer-thin characterizations and the camera & editing nonsense leave it feeling like irresponsibility posing as Art.

Budget was $3,000,000. Grosses came to $1,266,955 in the States, $8,745,067 elsewhere (look at those bestial Americans!).  Followed later in 2003 by Zero Day (made in 2001), an indie ‘found-film’ story that pulled good reviews but saw bare release. When these were made, the Columbine High School mass-shooting from 1999 was still reverberating, and this, with its pair of dissociated perpetrators, obviously plays off that traumatic episode. Since then, there have been so many of these appalling slaughters they’ve become almost casually expected, which is as stark a commentary on a disintegrating culture—or civilization, since these horror shows are not just confined to America— as you can make.

At lazy variance with a strong track record for capturing anomie and isolation (Drugstore Cowboy, To Die For, Good Will Hunting), here Van Sant’s flat-lined, emotionally vacant, empty exercise adds zip to grasping—let alone understanding—any of the numbed-out nihilism that plays into such depressingly mundane horror-show acting-out. He may as well have titled it Random. 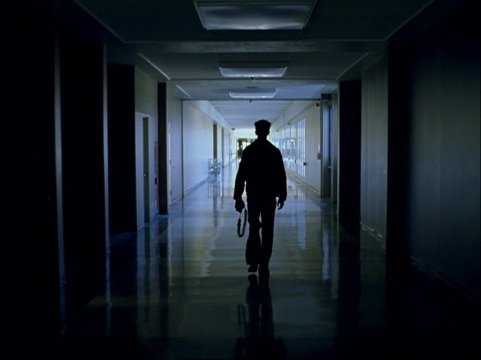